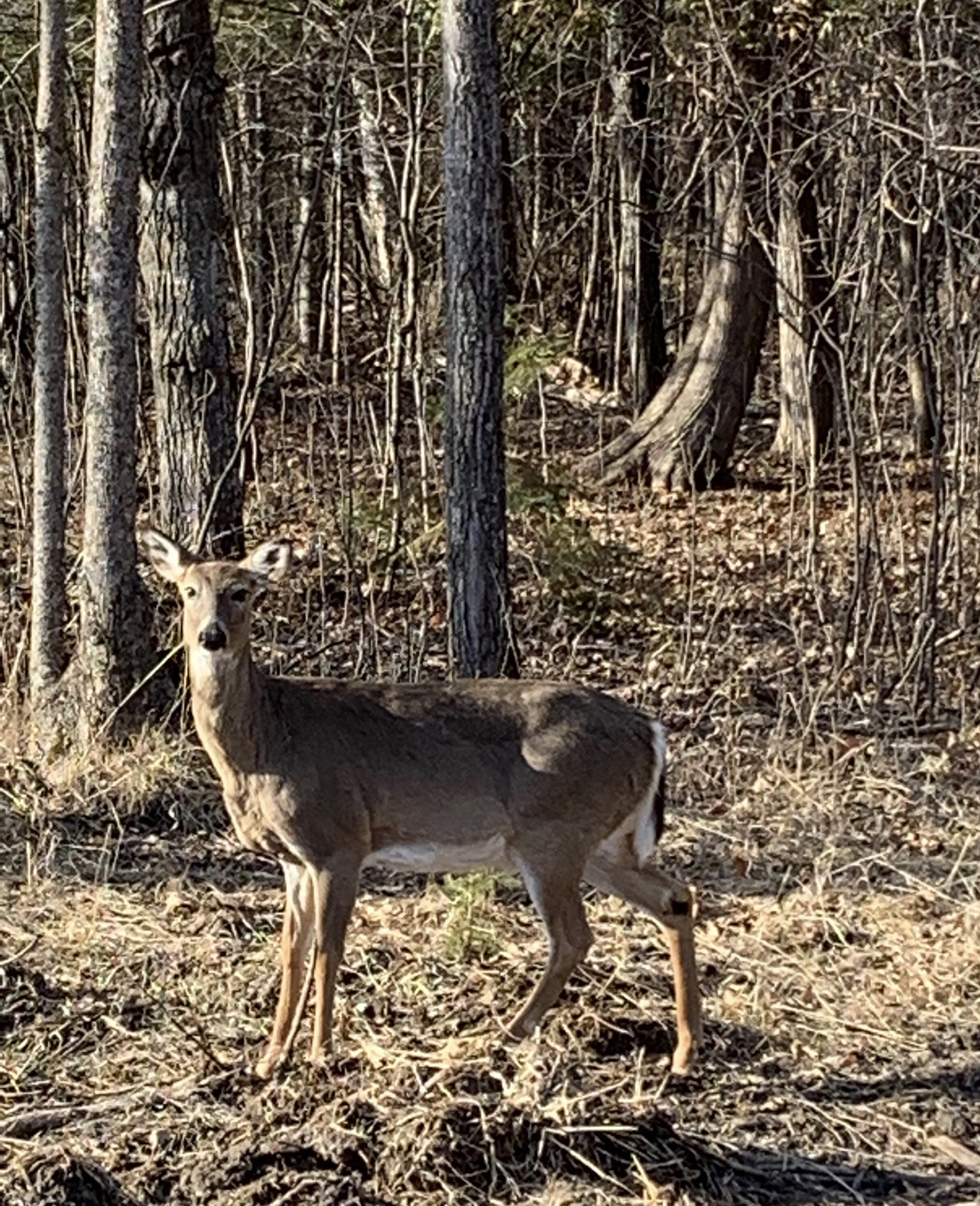 There’s no shortage of deer in our region, and Arlene Georgeson has been spotting plenty of them along her walks recently. If you’re out and about, take your camera with you, and take a picture of the beauty around you. Send it to tips@fortfrances.com, so we can share it with readers!

For several years, Sunset Country deer hunters and wildlife enthusiasts have said good-bye to autumn and then nervously wondered will this be the winter?
The year when cold temperatures and above normal snowfall accumulations combine to knock the local deer population on its knees. Or worse.
It is still far too early to tell, but the signs are suggesting it could be this year.
“I am seeing lots of animals in the bush,” a local woodcutter and deer hunter told me recently. “And while they’re not dragging their bellies in the snow yet, it is definitely above their knees.
“Conditions are starting to look like they did in the late 1970s and early 1980s.”
For those with short memories, or who may not have been around back then, in one particularly severe winter we lost about 50 percent of our deer herd in many parts of the region.
The following winter, another harsh one characterized by freezing temperatures and early, long, and heavy snow accumulations, we lost 50 percent of the survivors.
The herd we enjoy today is the result of the many warmer and drier than normal winters that have followed.
To be certain, whatever happens is all part of the natural rhythm of life and death. But it also is a poignant reminder that Mother Nature can be without mercy when she decides to be.
Minus-18 C (zero F) and 50 cm (18 inches) of snow often are regarded as the threshold levels that begin to define the danger zone.
The good news is that our deer—living on the precarious northern edge of their range—had a reprieve throughout much of December. That allowed the bucks, in particular, to feed and accumulate some body fat after a fall of otherwise carousing with the boys and chasing the girls.
While logic would suggest that smaller and frailer fawns would suffer the heaviest mortality (sometimes approaching 100 percent in harsh winters), large bucks don’t entirely escape the deadly conditions. They routinely burn up massive amounts of energy running around during the rut or fall breeding season.
Indeed, it is common for a male deer to lose 25 percent of its total body weight in the fall—at the worst possible time just before the first winter storms and punishing cold snaps belt our area.
With their tanks running close to empty, it is not surprising that some of what appear to be the biggest and fittest of animals often perish during particularly frigid and snowy winters.
If the bucks have any advantage at all, it is their overall body size and height that lets them reach food unavailable to smaller does and fawns. A buck’s body configuration and somewhat different metabolic system also allow it to conserve energy more efficiently and subsist on a marginal “junk food” winter diet better than does and fawns.
Still, I remember back in my university days working on a deer census during a particularly harsh winter in Kilbear Provincial Park on Georgian Bay. It was part of our wildlife management program and I was checking snow depths, snow profiles, air temperatures, and was participating on mini deer drives to count animals.
After several weeks of slogging through belly deep snow, some bucks were so tuckered out they’d barely run away when you approached them. It was almost possible to walk up to the big boys and slap them on their rumps.
But that wasn’t the most powerful lesson I learned. The deer literally were starving to death within sight of all the food they could ever have possibly eaten—a natural warehouse of nourishment.
Their batteries were drained so low, however, they would not leave the conifer cover and plow across a mere few hundred metres of chest-high snow to gain access to the browse.
Even with their bellies growling, the deer viewed the deep snow-covered beaver meadows and natural openings that blocked their paths just as we would a barbed wire fence or brick barricade.
As a result, they died within sight of food.
Does aren’t immune to the combined effects of freezing temperatures and heavy snow accumulations, either. But they are often affected in more sinister ways.
When it is time for them to give birth in the spring, their fawns often are poorly-developed. It is not uncommon for three out of four fawns to die, and for some strange but still poorly-understood reason, male fawns often are more likely to perish that females (although the opposite has been witnessed in some closely studied captive herds, where more female fawns died).
Surprisingly, too, is the fact that does rarely miscarriage. They simply give birth to malnourished and poorly-developed offspring that have little chance of surviving.
Indeed, the important lesson that we learn from the impact of severe winters, like the one that appears to be brewing, on does—and the following spring’s fawn crop—is that what happens over the next eight weeks or so largely will determine our immediate future deer prospects.
Because does don’t loose weight during the rut like bucks, their energy levels are typically higher going into the winter. But if they enter their third trimester of pregnancy in March and April and deep snow and cold temperatures continue to sap their energy levels, next year’s fawn population will be dismal.
And if our current snowy and cold conditions do persist for the next two to three months, even many of the big wily bucks that survive will reflect the stress for the rest of the year in the form of smaller and less uniform antlers.
So, will this be the winter?