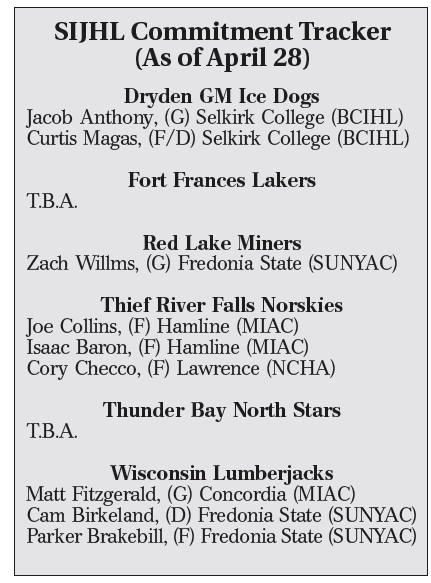 THUNDER BAY, Ont. – A trio of Thief River Falls Norskies of the Superior International Junior Hockey League will keep their playing careers going, while also continuing their education in the process.
The Norskies trio of 20-year-old forwards Joe Collins, Isaac Baron and Cory Checco have all earned NCAA Division III opportunities when hockey resumes.
Collins and Baron have both committed to the Hamline University Pipers of the Minnesota Intercollegiate Athletic Conference while Checco is heading to compete for the Lawrence University Vikings, who play out of the Northern Collegiate Hockey Association.
Playing at nearly a point-per-game pace with Thief River Falls, Collins, who hails from Shakopee, Minn., had 40 in 41 outings on 14 markers and 26 assists.
As for Baron, he was picked up by the Norskies from the Fort Frances Lakers in early October and went to score 22 times and help set-up 21 more for the club.
In all, the Burnsville, Minn., product registered 73 points in 95 career SIJHL contests.
Checco meanwhile arrived in Thief River Falls in January and went on to collect 26 points, in just 25 match-ups, netting seven goals and dishing out 19 helpers. His hometown is Lakeville, Minn.
Hamline U is in St. Paul, Minn., while Lawrence is situated in Appleton, Wis.