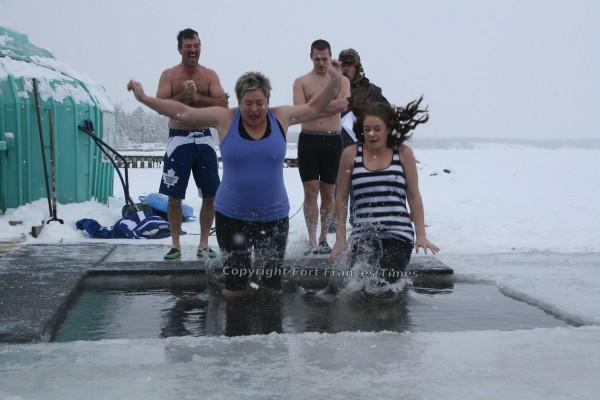 January first not only marks the start of a new calendar year but it is also when the local Voyageur Lions Club has their annual Polar Plunge event, where 20 or so brave souls leap into the below freezing water to raise money for charity.

The event is traditionally held at Point Park near La Place Rendezvous Hotel on the shores of Rainy Lake. But this year, due to the COVID-19 pandemic, the event will be held virtually.

Bill Michl, co-organizer of the Voyageur Lions Club Polar Plunge, said they realized in September that they were going to have to change their plans, leaving them with less than three months to reorganize the event.

Michl said they are working on putting the finishing touches on the website where all the information such as rules and pledge sheets will be available for participants.

For this year’s event, they are asking participants to send a video of themselves doing something outside in the cold such as swimming in the snow or the ice bucket challenge.

Michl said they are looking to have a 15-day window from Jan. 1-15 where participants can submit their videos which will then later be compiled and shown on the website.

The Polar Plunge usually has around 22 participants but Michl said he hopes that this virtual version of the event will bring in more people.

“We’re hoping to get at least 60 or more,” Michl said. “Now that all you have to do is go out and shoot a video, maybe more people will participate.”

Those participating will collect donations through pledges. Fifty per cent of the money raised by participants will go to the charity of their choice and the other half will go to the Voyageur Lions Club which helps with donations in the community to places such as retirement homes, the hospital and children’s sports.

Michl said the club has been hit hard by the COVID-19 pandemic, resulting in a lack of fundraising.

“I know it’s hard at this time because people are hurting all over so anything we make is a bonus for us,” Michl said. “We just felt if we gave it up, it’s hard to get back into it so we thought we’d run it virtually for at least this year just to keep people interested in it.”