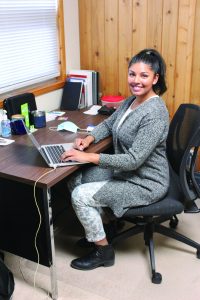 A new chiropractor has set up her home base in town.

Doctor Krisanne Mascarenhas is the newest practicing chiropractor at Fort Frances Chiropractic Centre, where she joins Drs. Jeremy McGuire and Cody Caul in offering her services to help protect and improve the health of people in the district.

While Mascarenhas is new to her role as a chiropractor, she has likely met a good number of people living in town due to the time she has already spent in the district before she started working in April of this year, due to her relationship with Caul.

“I’ve been here for the past four years on and off, whenever I had summers off from school I’d come here and spend the whole summer,” she said.

“I don’t think I’ve been here during Christmas break, but I’ve familiarized myself with the area. It’s not brand new to me. It’s quite nice, because [Dr. Caul and I] bought a house in the area, and I’ve met so many people along the way, it felt like I was coming back home.”

While Mascarenhas was born in India and spent time in Saudi Arabia in her youth, she and her family had been living in Ajax, Ontario since she was 11 years old. Now that she’s finished schooling and come to the Rainy River District to pursue her career, she’s intent on helping people keep a holistic view on their health, as chiropractors often act as a screen of sorts for their patients, treating what they can in house but also referring patients to their family or general practitioner for other issues they may discover.

“When I was in the area for the last couple of years, I realized there wasn’t a lot of female-focused practitioners, and I’m not really sure why that is, but I wanted to focus on pre and post-pregnancy and general pain management.”

As an example, Mascarenhas said she could work with someone who might have given birth years ago, but still deals with lingering pain or other abnormal symptoms that would be connected to that process, including things like bladder weakness.

“I want to focus on that and turn that into a little niche for myself,” she said.

“Mostly pelvic strengthening, just things that people should be doing but aren’t getting in this area, unfortunately.”

As someone who has chosen to make their life’s work helping others, it’s not outside the realm of possibility to think chiropractic medicine is a path Mascarenhas has always known she would be on, but that’s not quite how it all worked out for her.

“Some people always know what they want to do,” she recalled.

“I was not one of those people. For me it took a few years of figuring it out. I knew I was always going to be in health rehabilitation, I didn’t know where, if it was going to be physio, an M.D., I didn’t know what avenue. When I was in Toronto I volunteered at the Toronto Rehab Institute… and then I worked for the chiropractic school in their reception area and I just really enjoyed it, so I was like ‘why not?’ and so I applied, got in, and here I am.”

The misconceptions surrounding chiropractors abound, with the idea of a doctor cracking someone’s back and sending them along their way with the understanding they’ll need routine return visits to keep things in check. Mascarenhas said she wants to go towards helping bring awareness to what chiropractors actually do, to hopefully put those old myths to rest.

“I want to change that a little bit and self-empower people, so what I plan to do is give you self-management tools, first and foremost; help you decrease your pain, but then give you management tools so that you don’t have to keep coming back for passive care. It’s not about the 20 minutes you see me, it’s about all the stuff that’s happening in the week. I want to look at the person as a whole and figure out in there what we can change as a team, with whoever you’re working with.”

Hand in hand with wanting to focus on female-centred care, Mascarenhas said she’s also hoping to be able to work with First Nation communities in the area to be able to offer her services to them.

Now that she’s here living and working in Fort Frances, Mascarenhas also plans to take advantage of the natural offerings the region has to offer.

“The biggest thing that drew me to the area is the greenery and how much water there is around here,” she said.

“It reminds me of the place I’m from, which is Goa, India. That was first was a big attractant for me. I love the outdoors and this area offers more of it than a lot of places. I love anything on the water, I’m a huge kayaker. It just gives you a lot of opportunities that you don’t really get in the cities, or that you have to drive out to, and it’s in your backyard.”