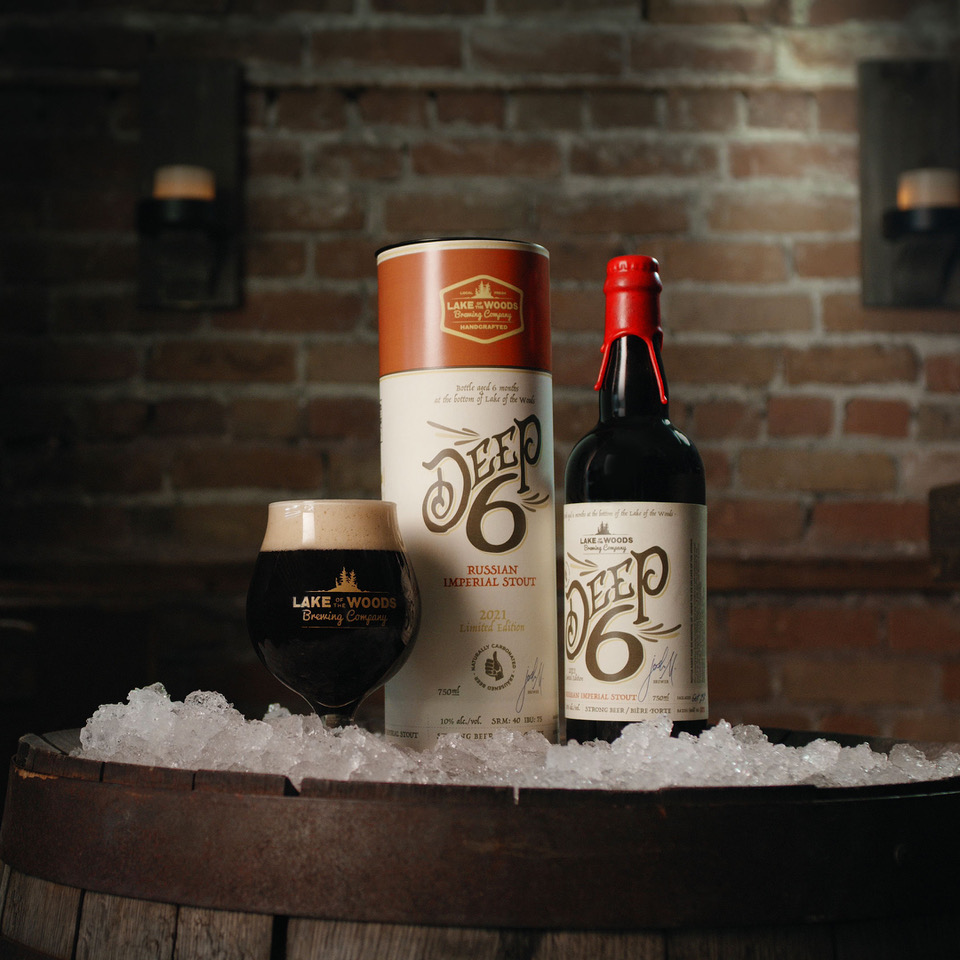 It’s not every day you can drink a beer that’s spent the better part of six months at the bottom of a lake, but if all goes according to plan, Lake of the Woods Brewing Company will be giving beer lovers the chance to do exactly that in 2021.

It’s all part of one of the newest additions to the company’s line-up. The beer, named “Deep 6,” is more than a year in the making, the result of thinking outside the box and taking inspiration from brewers the other side of the globe.

Taras Manzie is the president and CEO of Lake of the Woods Brewing Company, and he said the idea originated with one of their hires who had heard of a company doing something similar on another continent.

“We actually were fortunate enough that a few years ago we recruited a brewer from South Africa,” Manzie said.

“We were spitballing about ideas – different beers, different techniques, all that kind of stuff – and he had come across a brewery that had tried it when he was living there, but they take a batch and then age it in the ocean. We were like, ‘wow, that’s a novel idea,’ so we did some research on if it actually make sense in our climate, in freshwater.”

After plenty of research and a test run, the idea found its sea legs and a production run of 1,000 bottles is now sitting in its temporary home six feet beneath the surface of Lake of the Woods, where it will stay until the ice comes out in 2021 – whenever that might be.

“When the ice comes out, which is never really predictable but we figure by May 1, we’ll be good to go and start pulling them out and then we’ll hand package them,” Manzie said.

“You get a certificate with the beer. Each label’s hand-numbered, and will be signed by the brewer. We’re not going to clean the bottles or anything, if there’s lake residue on them, so be it, that’s exactly what you’re paying for. They’ll be presented in this special tube like you get a bottle of scotch in, custom manufactured for the individual bottles themselves.”

Part of the process of sinking the beer was determining how to store them safely over a period of six months underwater, as well as how to get them down there in the first place.

“We had to reverse engineer what we had to do. Obviously you can’t put it in cardboard boxes, so we needed something that’s going to be able to be sturdy enough but not too heavy, the bottles are heavy enough themselves. We were able actually to find pretty much a skid sized metal cage that had a folding top on it, so we got a few of those, repurposed them, took the filled bottles and they’re all sealed with wax, so there will be no issues with any kind of seepage or anything like that, and then layered them into each one of those caged totes.”

Once in the totes, the team at the brewing company chartered a boat and some moving equipment, and hired a professional diver to make sure the process went as planned.

“We actually hired a professional diver to make sure that we weren’t going to drop these things in the middle of a fish habitat or uneven ground or any of that kind of stuff,” Manzie said.

“We also had the diver to ensure that when we did drop the skids that they were sitting nice and evenly and not on top of each other, etc. etc.”

While some might be concerned that the bottom of the lake will get too cold for the beer, possibly leading to them freezing, Manzie explained that the temperature where the beer are sitting will only reach between three and four degrees (37 to 39 F) which he said is the perfect temperature for lagering the beer and will result in a Russian Imperial Stout that is “ridiculously smooth.”

“Some people’s Russians, they brew them so that they taste boozy because they are boozy, you would not know that there is one percent alcohol in that Russian when it’s going to come out,” he said.

“All the flavours kind of meld together, and due to the fact that it’s aged for a number of months in tank here prior to bottle and then once it’s in bottle at that temperature it’s an extremely smooth drinking product, it will be worth every penny.”

Even at a higher price than what might expect from a bottle of beer, the reception from the beer loving portion of the public so far has been strong, with more than half of all pre-sales having been spoken for by the end of day last Friday. Online pre-orders are still up, but the success of the beer has itself presented a bit of a problem with beer fans from the other side of the border.

“The problem is that because of AGCO regulations, we can’t ship the beer outside of the province,” Manzie said.

“We’ve had a huge number of inquiries, probably 50 percent of all of our inquiries have been from the U.S., or traffic on the website. We created deep6.beer, a separate website just to handle the sales and information for the site, and half of that traffic has all been from the U.S. Anyone is welcome to purchase the beer, they just have to either know someone in Kenora or Ontario, and then they can get it from them.”

Going forward, Manzie said the brewing company is expecting to make Deep 6 an annual release that will offer up a different type of beer each year, and that next year it will be available throughout Manitoba, Ontario and Minnesota.

But for those who managed to secure one of the bottles from this run, they’ll have a unique piece of northwestern Ontario history that will continue to get better and better until the day they finally pop the top and pour themselves a glass.