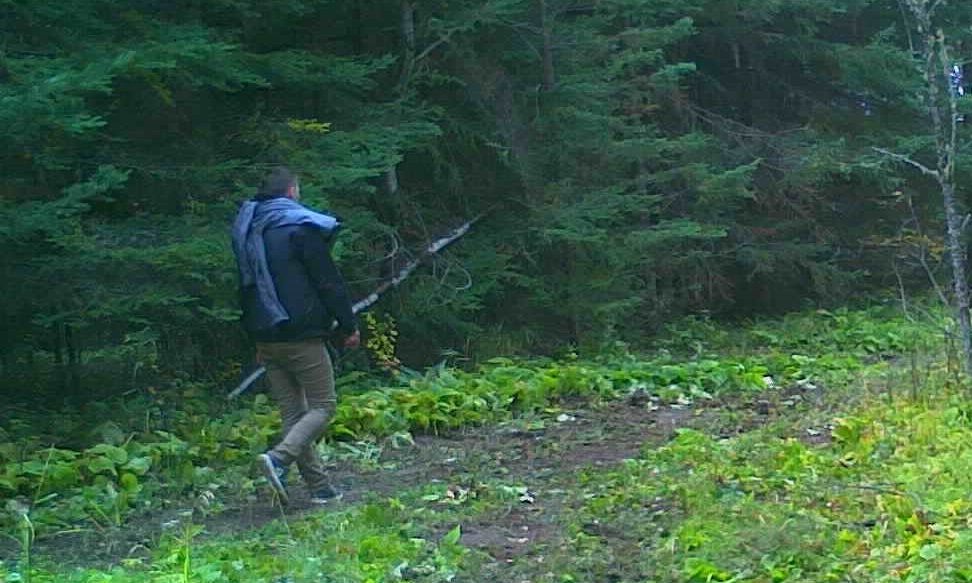 (DRYDEN, ON) – The search continues for Nazariy Geletiy. The 24 year old Vancouver, British Columbia man was reported missing, but was last seen on September 12, 2020 near Roussin Road in Machin Township (west of Dryden). Geletiy is described as being 6’0″, 160 lbs and has brown hair. He was last seen wearing a dark coloured sweater, light blue vest and beige pants. His hair is longer than in the photo initially provided to media. Police have reason to believe he may be somewhat disorientated.

The Dryden OPP have received multiples calls of possible sightings within the Dryden area. A second photo has been taken of who’s believed to be the man, on foot near the Roussin Road area.

Police are continuing their search efforts in the area and their investigation out of concern for Geletiy’s health and well-being. They have deployed officers on foot, along with K-9 units and a helicopter to aid in the search.

Any person with information regarding this missing person should immediately contact 911 or the OPP at 1-888-310-1122.

The OPP reminds all members of the public to be aware of their personal safety at all times. The OPP’s website, www.opp.ca, contains a number of useful resources, tips and links. Locking doors and property is a good deterrent and should be a regular practice.

(RED LAKE, ON) – On September 1, 2020 at approximately 9:49 p.m., officers from the Red Lake & Ear Falls Detachments of the Ontario Provincial Police (OPP) were advised of a possible impaired driver operating a vehicle within the Municipality of Red Lake. Officers commenced an investigation and determined that a demand for a breath sample was warranted and made of the driver. A 29 year-old man from Ste. Anne Manitoba, refused to comply and was arrested and charged with: Failure or refusal to comply with demand; Operation while prohibited. He was released to appear in Red Lake court on October 15 to answer to the charges.

On September 4, at approximately 10:10 p.m., officers from the Red Lake and Ear Falls OPP conducted a traffic stop in Ear Falls. Upon speaking with the driver officers determined she had been consuming alcohol and made a demand for a breath sample, which the driver failed. As a result, a 32 year-old Ear Falls woman, was arrested and charged with: Operation while Impaired -alcohol and drugs and Operation while Impaired -blood alcohol concentration (80 plus).

She was released to appear in Red Lake court on November 12, 2020 at 9:00 a.m. to answer to the charges. Motorists who drive impaired by alcohol or drugs are subject to drivers licence suspensions, fines, vehicle impoundments, criminal records and increased insurance costs. Please drive responsibly, don’t drink and drive.

The OPP is committed to safety for all who utilize Ontario’s roadways. Members of the public are urged to report Impaired Driving by calling 911 in emergency situations. Complaints of impaired, aggressive or careless driving can also be made by calling 1-888-310-1122.

(RED LAKE, ON) – On September 15, officers from the Red Lake/Ear Falls detachments of the Ontario Provincial Police (OPP) Community Street Crime Unit (CSCU) and detachment conducted a traffic stop on Highway 105 in the Township of Ear Falls as a result of an ongoing investigation. A quantity of cocaine and ecstasy was seized.

He was released to appear in Red Lake court on October 15 to answer to the charges.

(PICKLE LAKE, ON) – Shortly before 2:30 am on September 13, members of the Pickle Lake Detachment of the Ontario Provincial Police (OPP) dispatched to a fire in progress on Lakeview Crescent.

The Pickle Lake OPP is investigating this fire as suspicious. Members of the Kenora Forensic Identification Service and the Northwest Region Crime Unit are assisting with this investigation.

Officers were also dispatched to a second attempted arson on Lakeview Crescent involving an attempt to light a vehicle on fire.

It is unclear if the two incidents are related.