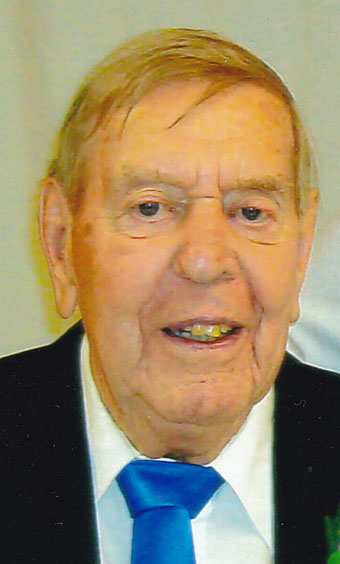 We regret to announce the passing of Thomas (Tom) Kiddle, at the age of 91, on Saturday, Feb. 4, 2017 at La Verendrye Hospital in Fort Frances, Ont.
Tom was born in Emo, Ont. to Herbert and Alice Kiddle. They later relocated to Fort Frances, where Tom’s father was employed at J.A. Mathieu’s sawmill.
Growing up, Tom spent countless days in the area of the sawmill and loved to talk of the fun times he and his friends had there.
Tom attended Fort Frances High School. Since he always was interested in woodworking, Tom later went to work for Harrem’s Woodworking. After many years of employment, he went on to purchase the business from Harold Harrem.
After selling the business, Tom went on to do maintenance for the residents of Flinders Apartments until fully retiring in his 80s.
Tom was very involved with different community projects throughout his lifetime. He was a long-time member of the Elks Lodge and a lifetime member of St. John’s Anglican Church.
Tom remained true to his Christian beliefs throughout his life. He had many lifelong friends who will miss him very much.
Tom was married to the late Hazel McKay until her death in 1984. In 1989, he married Elaine White, who now resides at Rainycrest.
Tom was predeceased by his parents, Herbert and Alice Kiddle; wife, Hazel; sister, Betty; brother, Leslie; and step-son, Blaine.
He is survived by his loving wife, Elaine; and step-children, Laura (Bob), Keith, Cindy (Dale), Doug, Randy (Diane), Kelly (Dan), and Barbara (Warren), along with their children, grandchildren, and great-grandchildren.
A memorial service will be held Thursday, Feb. 9, 2017 at 10 a.m. at St. John’s Anglican Church, with Rev. MJ D. Leewis-Kirk, AOJN, officiating.
Cremation has taken place and Tom’s ashes will be buried at a later date.
The honourary pallbearers will be Bruce Murray, Dr. Bob Lidkea, Vic Gustafson, and Frank DeBenedet.
If friends so desire, in memoriam donations may be made to St. John’s Anglican Church or Rainycrest Long-Term Care c/o Green Funeral Home, P.O. Box 427, Fort Frances, Ont., P9A 3M8.
Online condolences may be offered at www.greenfuneralhomefortfrances.com