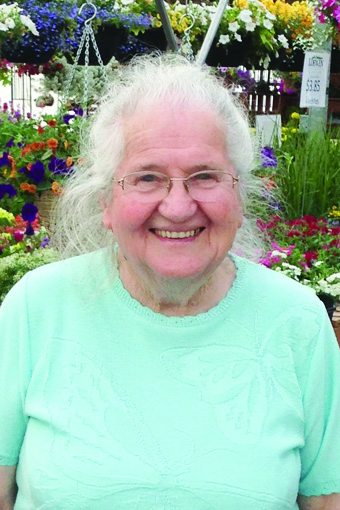 Ruth Nussbaumer of Emo, Ont. went to be with her Lord and Saviour on November 22, 2020 at the age of 96.
She was born on September 3, 1924 in Basel, Switzerland to Daniel and Martha Gerber. She grew up on a farm in Switzerland and was the youngest of eight children with five brothers and two sisters. She surrendered her life to Christ at a young age who was everything to her right to the end. She loved to sing especially as a family around the supper table, even as her dementia was progressing she would try to sing along. She enjoyed gardening, cooking, baking and knitting especially dishcloths which she was able to do for quite some years until she was no longer capable. She loved people and children held a special spot in her heart and she prayed for them. We will never forget her radiant smile and her love for the Lord.

She was united in marriage to Daniel Nussbaumer on May 20, 1948, and they enjoyed 64 years together. They were blessed with four sons and five daughters.

They operated a farm in Reiningue, France for 18 years then immigrated to Canada with their nine children on December 15, 1975. We will always remember her quoting the verse from Lamentations, “the Goodness of the Lord is new every morning,” especially when things were difficult. This was such an encouragement.
She will be lovingly remembered by her children: Philippe (Edith), Markus (Margrit), Andre (Monika), Joel (Joelle), Rachel, Lydie, Elisabeth Hirschler (Jean Paul), and Anne Carradice (Glen). She was blessed with 31 grandchildren: Simeon (Rachel), Daniel, Jeremy (Gabrielle), David (Kimmie), Lucas, Philemon (Danika), Joshua, Tabea, Lydie Stanislavsky (Roman), Hanna Empey (Jacob) Jael, Theophil (Sara), Japhet, Debora, Ruth, Elisabeth Veert (Anthony), Samuel, Abigail Sherk (Greg), Jonathan (Kathryn), Pierre, Esther, Rachel, Evodie, Lydiane Hirschler, Lois Fleurent (Jonathan), Aurelie H, Adeline H, Moriah Carradice, Lemuel C, Naomi C, Tirzah C, and nine great-grandchildren Malachi and Rafael, Anya, Eli, Priscilla and Elliyana Nussbaumer, Jase and Remi Veert and Elyne Fleurent. She is survived by one sister, Bethli Martin and three sisters-in-law Lydie Husser, Violet Nussbaumer, and Gerada Gerber as well as numerous nieces and nephews and cousins. She was predeceased by her daughter Tabea in 2011 and her loving husband Daniel in 2013.
As a family, we wish to thank you for your prayers and support during our loss.

Due to COVID restrictions a graveside service will take place in Emo Cemetery by invitation. COVID guidelines set forth by the North Western Health Unit will be observed.

If desired memorial donations may be made in Ruth’s memory to the Emo Hospital Auxiliary by cheque c/o Northridge Funeral Home, Box 89, Emo, ON P0W1E0.