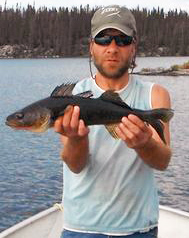 It is with profound sadness that the family of Richard “Ricky” Thompson announce his sudden passing on Oct. 21, 2019 at the age of 47.
Rick was born on Sept. 25, 1972 in Emo, Ont. to Doreen and Vernon Thompson. He lived his whole life in Emo.
Rick lived with a degenerative bone condition which prevented him from having long-term employment.
He tried hard not to let his condition stop him from helping out where needed and he was frequently found lending a hand to dad in his shop, as well as doing odd jobs for many other people in the community.
Rick had a heart of gold and he would do anything for anyone if asked.
Those that knew him well understood that he had many struggles in life and he lived with constant pain and this often caused great strain on the relationships with family and friends.
However, one look around his home and it was easy to see that Rick’s greatest value was family and friends and that he loved everyone deeply even though at times he was not able to properly express it.
Rick liked to be the life of the party. Back in the day, many good times were had at his house by the car wash.
He enjoyed attending socials in the district where he was never shy about showing off is legendary “Ricky T” dance moves. Dressed to impress the ladies, comb in back pocket, he was ready to go.
Rick had three passions in life: collecting, fishing, and racing.
He spent much of his time collecting a large variety of interesting items such as teapots, meat grinders, glassware, brass, and really anything that caught his eye at a garage sale.
He never threw anything away and he always had a “plan” to rebuild or repurpose it even if it appeared to be junk.
Rick’s favourite pastime was fishing. He took great joy in doing the Emo Walleye Classic tournament with his brother, Darwin, and looked forward to it every year.
Although Team Thompson never took the top spot he was over the moon with pride the year they came in with the biggest fish of the tournament. What Rick cherished most was all the time he spent helping his son, along with his dad and brother work on Jesse’s stock car.
He beamed with pride watching his son race and he never missed a weekend at the track.
He did his best to be a good father, son and brother.
Leaving behind to mourn his loss are Rick’s three children, Jesse, Cierah, and Lillian; his parents, Doreen and Vernon; his brother, Darwin, and wife, Corrie; his faithful companion, Fred, and his brother by choice, Mikey.
He is also survived by his paternal grandmother, several aunts and uncles and numerous cousins.
Honorary pallbearers are all the friends that shared the good times with Rick back in the day.
A celebration of life will be held on Sunday, Nov. 3, 2019 at the Emo Legion at 2 p.m. with a lunch to follow.
If desired, memorial donations may be made in Rick’s memory to the Friends of Animals, c/o Northridge Funeral Home, Box 89 Emo, ON P0W 1E0.