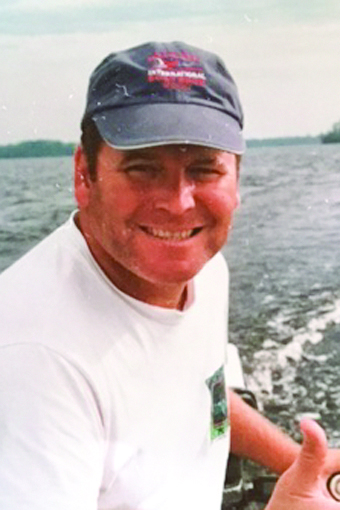 Randy Stewart’s family is heartbroken to announce his passing at his home in Thunder Bay, Ontario on Wednesday, April 7. Randall John Stewart was born on September 6, 1958, to Sandra and Frank Stewart. In the next few years he would be joined by brother Rob, and then little brother Rick. Known affectionately as “Randy,” he was a kind, protective and sometimes bossy big brother.

When he was (nearly) old enough Randy started working for his Uncle Dick sweeping sawdust off the floor of the butcher shop at Food Basket. He and his Uncle developed a very close, loving bond.

Randy had such a great love of Rainy Lake, growing up on the family cabin on Reef Point, and later working for his Dad as ‘dock boy’ at Lakeland Marina. When he was 17 he was promoted to “Captain”  of Lakeland’s 66 foot barge, making gas and supplies deliveries to all areas in the North Arm.  He relished the challenges and responsibilities of this job, and proved his Dad’s trust in him. Randy made life-long friends on this job and loved being on the water. He enjoyed his water skiing and perfected his skills, and was once asked to ski with a professional team that came to Fort Frances to entertain at the Point Park on July 1st.

After graduating FFHS, he and his good friend Paul Medhurst packed a bag, threw in a hammer, and headed west to seek their fortunes. Randy met his then wife Tina, known affectionately as “Teenie,” at Expo ’86 and they had three sons – Michael, Daniel and Kyle. He was so proud of his three boys and he loved to brag. Eventually he opened a construction company, Ridge Management, and at 28 he built what was then the highest price home to be built on speculation in the lower mainland. He and his family bought a large boat and enjoyed exploring the big waters off the coast. Tina and the boys always felt safe with Randy at the wheel. He was an excellent captain and his love for the water shone through him on their many happy adventures. Rick and Jenny had moved to Vancouver and both families took up scuba diving. Some of the happiest times in Randy’s life were on the water with Rick. Randy loved Rick and his wife Jenny, and his precious nieces, Abby and Anna.

Randy, when at his best, seemed larger than life, with an amazing sense of humour and an infectious laugh that could be heard across the room. He could be seen standing with a group of people, usually including his Pappy and his Uncle Dick, everyone’s shoulders jiggling with laughter at one of his stories. Randy’s three sons remember him for his thoughtful discussions, infectious laugh, and his amazing creativity in construction. They will always cherish the memories they have of him teaching them to drive, teaching them to shoot, doing “kapowies” in the boat, and helping him on the job site.

Randy’s mother was his greatest friend. They enjoyed daily conversations, being in a kitchen together, and sitting in the sunroom at the cabin to start the day. Randy was a natural chef who loved to prepare elaborate meals for his loved ones. He was famous for his legendary barbeque sauce, marinades, and rubs that could turn any collection of food items into a fancy family feast. He and Julian shared a love for building, craftsmanship, and Rainy Lake; Randy was eternally thankful for Julian as a stepfather, often telling his boys that ‘Jof’ was one of the best men he had ever known.

Randy was pre-deceased by his father Frank and his beloved brother Robbie; his grandparents and Uncle Dick. He leaves his parents Sandra and Julian Brunetta; his brother Rick and wife Jenny and nieces Abby and Anna; his three sons Michael, wife Tara, Daniel and Kyle, and his precious new grandbaby Kash. He will be missed by his many cousins: Kelly and Sue, who grew up along side of him more like sisters, and their children Andrew, Hazel, Peter and Katie; and his Stewart cousins Laurie, Sherry and Wendi, Don, Darryl and Dale Misner, Travis, Keri, Aimee, Samantha, Laurie and Thea; and by his two favourite aunts, Auntie Carol Lyons and Auntie Jan Marshall.

Randy was smart, funny, kind, generous and so loving.  He loved his family beyond all measure.  He never stopped learning, especially astronomy, planets, and the universe. His loving personality and thoughtful conversation will be missed.