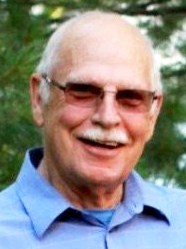 Peter, who was affectionately known as “Weeds” by many, quietly passed away on the 19th of May, 2018 at 77 years of age with family by his side.
His passions were many and included his devotion to his family, his love for landscaping and woodworking, and the never-ending quest to end weeds and potholes.
Born on Dec. 12, 1940, he starting very young playing in the dirt and it stuck. As a youngster, Peter started working with his father, Edward, at Wilkins Greenhouse in the west end of Fort Frances while his mother Dorothy ran Wilkins China Shop.
When working at the greenhouse, he was known for his saucy character; an example was when he told a rather disgruntled customer that she should jump in the lake and pull the bubbles in after her.
Peter was passionate for sports. In high school, he played football, basketball, and track and field for the Muskie sports teams, and also was a lifeguard at Point Park. He also enjoyed curling with his cousin, Frank Myers, and friends, Dick Gustafson, Ray Taylor, Ted Berry, and Ross Pearson.
Peter met his soulmate, Janet, in high school and after establishing their relationship, Peter popped the question. They were married on July 24, 1965 with his best friends Mel Trethart, Dick Gustafson, and Frank Myers standing up for him.
After attending florists’ school in Chicago, he began his own business called Wilkins Flower Shop. He continued to hone his passion for flowers at the shop with his wife, Janet. In later years, they took over Wilkins China Shop when his mother retired.
In the mid-1970s, Peter and Janet purchased a cabin on Dude Island where many wonderful memories were made.
Peter was an active member of the community. He was past president of the Jaycees, Past Master of the Masonic Lodge, chairman of the Business Improvement Area (BIA), at which time he convinced the mill manager to donate the “Hallett” to the Town of Fort Frances, where it is now a historical display at the Sorting Gap Marina.
Some may remember his good friend, Barb Berry, making him a T-shirt which read: “Now what do I do with the Hallett.”
Peter always was a supporter of the “Fun in the Sun” event. You would see him dropping flowers from a plane down Main Street or balancing cars on cups and saucers in front of the China Shop. He was a strong supporter of local businesses in Fort Frances.
Peter was a lover of music and shared this love with his family, whether they liked it or not. As he would listen to the classical music, you would find him singing along or conducting as the music unfolded. You also could look for the piles of black soil and there he would be planting some new grass trees or flowers. He took pride in his yard and was a perfectionist.
Peter was ambitious and wanted a new adventure. At the age of 41, he packed up the family from the home he built on Elm Avenue and moved east of town where he established “The Great Bear.” He loved the new challenge and it was a place for the whole family to work together. The business grew substantially but due to health issues, he regretfully had to sell the business and take some time off.
It was around this time that another family house was built on Sieg’s Point. The house on the lake was the meeting place for the family as they all grew up and started branching off on their own. Summer meant staying at Sieg’s Point and spending time with the family on the lake.
Being too young to retire after selling The Great Bear, Peter worked for a short term as the band manager of Couchiching and finally ended his working career at the MNR, where he retired at the age of 60.
Peter was a fun-loving grandpa and often would be seen with a little one on his shoulders, cruising around on the Gator, or with happy children screaming wildly on the tube behind the boat. He was fiercely proud of his children and his grandchildren, and loved them dearly and with devotion. He looked forward to their visits and always would anticipate their return to their house on the lake.
He also loved his black lab, “Portia.” He was a sensitive man who wasn’t afraid to show his softer side.
Peter was predeceased by his parents, Edward and Dorothy Wilkins; brother, Tom Wilkins; sister-in-law, Mary Wilkins; and in-laws, Leif and Eleanor Willer.
Peter is lovingly survived by his wife, Janet, of 52 years; children, Marion (Randy) Beamish of Thunder Bay, Ont., Sandra (Kevin) Enns of Minnedosa, Man., and Mark (Andrea) Wilkins of Red Lake, Ont.; grandchildren, Alexandra, Nicholas, Tristan, Kowan, Jordan, and Brody; brother-law, Gordon (Dot) Willer of De Pere, Wis.; and numerous nieces and nephews.
Cremation has taken place.
The family would like to welcome you to a celebration of his life on Saturday, June 2, 2018 from 1-3 p.m. at La Place Rendez-Vous, 1201 Idylwild Main, Fort Frances, Ont.
If so desired, in memoriam donations may be made to Riverside Foundation for Health Care, 110 Victoria Ave., Fort Frances, Ont., P9A 2C1 or a charity of your choice.
Your life was a true blessing, your memory was a sure treasure, your sense of humour was contagious. You are loved beyond words and we will miss you forever. . . .