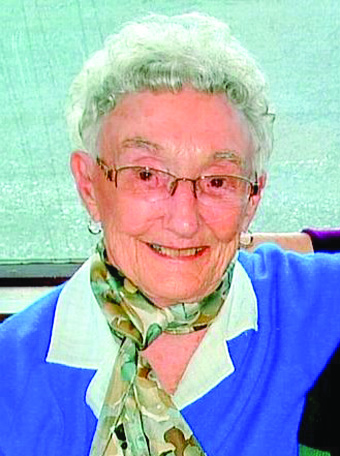 Olive was born May 6, 1924 to Sid and Florence Ward in Fort Frances. She didn’t have long to settle in her new home as Dad, suffering from ill health, was advised to take six months off work. It was decided to return to England to visit, so along with her parents and two older brothers she set off on a transatlantic voyage to England. Although just an infant, it was perhaps this experience that planted the seed for a love of travel in her later life.

Olive attended elementary and secondary schools in Fort Frances. The year prior to graduating high school, she obtained a summer job at the Bank of Commerce. When it was time to return to school, the bank manager asked if she would be interested in a full time job. She asked her father and he encouraged her to take the job, which she did.

It was during this period that she met a handsome, young RCMP officer, Irvin (Ike) Eisenhauer, who had been newly appointed to Fort Frances to patrol Rainy Lake and the border region. They were married in 1952 and shortly thereafter moved to Halifax. Olive continued with her bank career and Ike commanded an RCMP boat patrolling Canada’s east coast. They lived in Halifax for 12 years before Ike was again transferred to Ottawa and then to St. John’s, Newfoundland where he finished his career.

When Ike retired, they lived in Bridgewater, Nova Scotia near his old hometown of Lunenburg. After a number of years there, they decided to move back to Fort Frances where they spent their remaining years.

They both had a passion for travel. They made numerous trips by way of tours to various European Countries and cruises, Ike’s favourite form of vacation, to many different parts of the world. They also enjoyed a number of years as snowbirds in Florida.

Olive had a keen interest in politics and financial news and was always willing to engage in conversations on these topics. She was sure to ask anyone visiting from out of town to bring a copy or two of a national newspaper that she would avidly read cover to cover.

Friends are invited to a visitation on Monday, November 30, 2020 from 7:30 p.m. until 8:30 p.m. at Green Funeral Home in Fort Frances. COVID-19 Restrictions will be followed including limiting attendees to 30 people, everyone will be asked to wear a mask and to follow social distancing.

A private family service will be held on Tuesday December 1, 2020 at the Knox United Church in Fort Frances with Reverend Schaulk Naude officiating. Interment will take place in Riverview Cemetery in Fort Frances.

The honourary pallbearers will be her nieces and nephews.