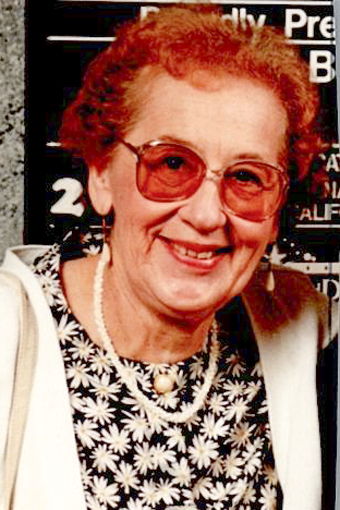 With heavy hearts the family of Mary Demianiw, age 95 years, announce her peaceful passing on Monday, June 8, 2020.
Mary was a lifetime resident of Fort Frances, living the majority of her life in the family home on Crowe Ave. She moved to Shevlin Towers later in life where she lived for many years. After a fall left her unable to manage without assistance, she moved to Rainycrest Home for the Aged where she spent her last years.
Mary was born on May 7, 1925 to Nettie and Mike Demianiw. She had one older brother, John, who she was very proud of and looked up to as the consummate “big brother.”
Mary had a wonderful memory and a flair for numbers. She spent her entire working career as a bookkeeper. She started working at Henry Motors straight out of high school and worked there for many years until her brother sold the business. She then worked at Clinic Pharmacy for several years followed by several enjoyable years working for Thompson’s Distributing until her retirement at age 65.
Mary was a lifetime member of St. George’s Ukrainian Orthodox Church with most of those years spent singing in the choir. She truly enjoyed singing and loved music in general. She played the violin in her youth, sang with Diane Maxey’s Choraliers and was a member of the Rainycrest Choir. She particularly enjoyed singing in Ukrainian. She was very proud of her Ukrainian heritage and was an active member of the Ukrainian community throughout her life. Mary was a member of St. Anna’s Ukrainian Women’s Association and the Ukrainian Literary Society. She helped contribute to the many delicious meals and caterings which were such an important part of Fort Frances’s history.
In her younger years, Mary loved to travel and each winter she was eager to travel to a warmer climate. Family and friends loved hearing of her adventures and seeing her photos upon her return. She also loved puzzles, playing scrabble, playing badminton, and participating in her weekly bowling league, which she did well into her seventies.
Although Mary had no children of her own, she was often looked upon as a second mother to Judy, Paul and Nancy, her nieces and nephew. Mary never lacked for energy, and she often swam, biked and hiked with the Demianiws’ as they grew up, creating memories that will be cherished forever. She was a strong woman, fiercely independent, and had a feistiness about her that she retained even as her health declined.
Mary was always a huge part of the Demianiw family. She was present for every occasion and every holiday. She was the primary caregiver for her father in the family home right up until his passing at the age of 99. She was a favourite Aunt, Great-aunt and friend. She enjoyed watching her great-nieces and nephews grow up and while she was able, had them over for sleepovers which Paul’s kids always looked forward to. The summer trip to pick the apples off Mary’s tree was an annual family ritual.
Mary was predeceased by her parents; her brother John in 2010; and sister-in-law Mary in 2007.
She is survived by her nieces Judy (Gord) McCabe, Nancy (Jim) Rogers and nephew Paul Demianiw. She is also survived by great nieces and nephews Evan McCabe, Graham Rogers, Megan (Rogers) Guzzell, Jessika Rogers and Natasha, Marissa, Andrea and Mark Demianiw.
Cremation has taken place. A memorial service will be held in July when family are present.
Should family and friends so desire, memorial donations may be made to St. George’s Ukrainian Orthodox Church, c/o Ann Wood, 242 Sixth Street East, Fort Frances, ON, P9A 1B3 or to Riverside Health Care – Rainycrest Longterm Care Special Unit, 110 Victoria Avenue, Fort Frances, P9A 2B7.
Online condolences may be made in care of www.greenfuneralhomefortfrances.com.
Rest in peace Mary. You will be forever in our hearts

Peacefully in faith, and surrounded by her loving family, Mary (Mimi) Demianiw, 83, beloved wife, mother, auntie, Baba, and friend, passed away on Monday, May 7, 2007 at La Verendrye General Hospital in Fort Frances, Ont.
Mary was born July 31, 1923 in Stuartburn, Man. to the late George and Mary Badiuk.
When Mary was three years of age, the family moved to Fort Frances, where she spent the rest of her life except for a brief stint working in southern Ontario during World War II.
On June 19, 1946, Mary was united in marriage to John Demianiw. Mary and John’s primary interest was always their family. They worked together to raise their children and, later, to cherish and enjoy their grandchildren.
Mary was a member of St. George’s Ukrainian Orthodox Church and a member of St. Anna’s Women’s Club. She also was a longstanding member of the Ukrainian Literary Society.
During the 1960s, she began work at Wilkins China Shop—a job she treasured until her retirement in the late 1970s.
Mary was a wonderful wife, mother, grandmother, and homemaker. She cherished tending to her family’s needs and loved puttering in her flower beds and garden, canning, and making mouth-watering meals for her family and friends.
She especially enjoyed her daily tea time with whoever was handy to enjoy her infectious sense of humour.
During the summer months, Mary and John loved spending time at their cabin on Rainy Lake, where they enjoyed the beauty and tranquillity of nature.
She was predeceased by her daughter, Janice Demianiw in infancy; one brother, Nick Badiuk; and four sisters, Dora Gogosha, Helen Chornley, Rose Goatley, and Olga Asplund.
Mary will be sadly missed and remembered by her devoted husband of 60 years, John.
She also leaves to cherish her memory two daughters, Judy and husband, Gord McCabe, of Fort Frances, Ont., and Nancy and husband, Jim Rogers, of Balmertown, Ont.; one son, Paul Demianiw and wife, Irene, of Etobicoke, Ont.; and eight grandchildren, Evan McCabe, Graham, Megan, and Jessica Rogers, and Marissa, Natasha, Andrea, and Mark Demianiw.
She also is survived by two brothers, Metro Badiuk and wife, Mary, and Bill Badiuk and wife, Dixie, all of Fort Frances, Ont.; one sister-in-law, Mary Demianiw of Fort Frances, Ont.; and numerous nieces and nephews.
Funeral services will be held Friday, May 11, 2007 at 10 a.m. at Green Funeral Home in Fort Frances. Fr. Henry Lakusta will officiate, with interment in Riverview Cemetery in Fort Frances.
Family and friends may visit Thursday, May 10, 2007 from 7 until 8 p.m. at Green Funeral Home. Prayers will be offered at 7:30 p.m.
The pallbearers will be her grandchildren.
The honourary pallbearers will be family, friends, and St. George’s Ukrainian Orthodox Church members.
If friends so desire, in memoriam donations may be made to either the Alzheimers Society of Kenora/Rainy River District, Box 837, Kenora, Ont., P9N 4B5 or St. George’s Ukrainian Orthodox Church, 804 McKenzie Ave., Fort Frances, ON., P9A 2B2, or ic/o Green Funeral Home, P.O. Box 427, Fort Frances, Ont., P9A 3M8.
Online condolences may be left at www.greenfuneralhomefortfrances.com