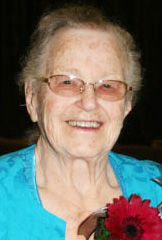 Margaret Elizabeth Radbourne, 94, of Fort Frances, Ont., formerly of Emo, Ont. passed away peacefully at Rainycrest Home for the Aged on Saturday, Aug. 10, 2019.
Peggy was born Feb. 10, 1925 in Toronto, Ont. She was the only child of the late David and Helena Smith. She grew up close to her many
cousins in the Toronto area.
Peggy worked briefly for the Toronto Transit Commission before meeting the love of her life.
She was united in marriage to Walter (Ken) Radbourne on Dec. 9, 1944.
They resided in Halifax during the war, then returned to Toronto before settling in Emo in 1950.
After retiring, they sold the farm and moved to Fort Frances.
Peggy always vowed she’d never marry a farmer, but ultimately was swept off her feet by Ken, who farmed their land for many years. Together, they raised their family of five children.
As it turned out, Peggy enjoyed the farm life. She spent many hours preserving fruits and vegetables from their family garden, and you could
always find homemade baking in her cupboards.
One of her favourite benefits of being a farmer’s wife was all the many visits from their family and friends.
Nothing pleased her more than spending time with her children, especially her grandchildren.
After raising her own family, she took in foster children for a time. She also worked, for a while, as a home care worker, where she enjoyed spending time with her clients.
She was predeceased by her dear husband, Ken Radbourne (2002); son, Allan (2013); and in-laws, Jack and Edith Radbourne, Len and Minnie Radbourne, Violet and Lyall Baker, and Dorothy and Lyall Beninger.
She is survived by her children, Paul (Sharlene), Eleanor, daughter-in-law Glenda, Cathy (Ken) Nadiger, and Mags (Don) Cumming; grandchildren,
Kevin (Caroline) Radbourne, Chandra (Darin) King, Jennifer Radbourne (Doug Wood), April (Garrit) Doll, Brandi (Stephen) Carter, Chantelle (Matt) Bailey, Rachelle (Justin) Goodkey, Kyle (Chelsea) Nadiger, Tanya (Marlon) Jerome and Graham (Ashley) Cumming; as well as great-grandchildren, Eric and Kent Radbourne, Danaka and Tanner King, Olivia, Natalie and Rebecca Doll, Savannah and Autumn Carter, Declan Bailey, Grayson and Henley Goodkey, Benjamin and Elan Jerome, and Tayah, Laken and Oakley Cumming.
She will be deeply missed by her family and friends.
Funeral services will be held on Thursday, Aug. 15, 2019 at 1 p.m. at Green Funeral Home.
Pallbearers are her grandsons Kevin Radbourne, Graham Cumming, Kyle Nadiger, Darin King, Marlon Jerome, Matt Bailey, and Justin Goodkey.
Honourary pallbearers are her grandchildren and great-grandchildren.
In memoriam donations may be made to the charity of your own choice.