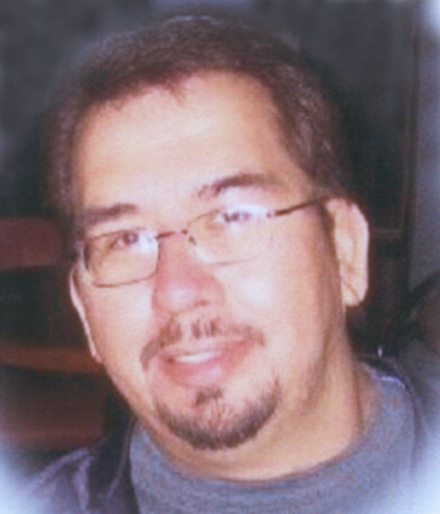 A funeral service and interment for Kevin Morrisseau was held at Our Lady of Lourdes Roman Catholic Church at Couchiching First Nation, Ont. on Monday, March 19, 2018 at 11 a.m., with Fr. Ben Hadrich officiating.
Kevin passed away unexpectedly on Sunday, March 11, 2018 in Grand Marais, Mn. at 47 years of age.
He was born on Oct. 15, 1970 in Fort Frances, Ont. to Wilf and Linda Morrisseau.
Holding dearly onto his memory are his brothers, Darren, Cody (Desiree), and Eric; niece, Emily; nephews, Keenan, Austin, and Lennox; and his best friend, Uncle Don.
Also grieving his loss are numerous cousins, aunts, and uncles, as wel as the many lives he touched and befriended throughout his life.
Kevin was predeceased by his parents, Wilf and Linda Morrisseau; paternal grandparents, Wilf and Rosalee; maternal grandparents, Sam and Margaret; uncles, bill Jourdain, Riley Jourdain, Russell Jourdain, and Dennis (“Spig”) Perreault; aunt, Glenda Mainville; and cousins, Pamela Mainville, Grant Perreault, and Katey Jourdain.
Kevin grew up on Couchiching First Nation, where he enjoyed spending time with family and friends.
In his teen years, Kevin was employed with Couchiching, having various jobs, later moving on to Nanicost Ltd., where he was employed in the Maintenance department.
Kevin obtained his diploma from Fort Frances High School and a Business diploma from Confederation College in Thunder Bay, Ont.
After college, he obtained employment with Grand Portage Lodge and Casino. He took a couple of leaves from the casino but returned and remained until his final day here.
Kevin truly was his father’s son, having the same values and beliefs. He was a kind, caring, thoughtful person who would help any and all in need.
He was gentle yet strong in body, mind, and heart, easily making friends with all who met him in Thunder Bay, Grand Portage, and other parts of this world.
He had a special love and cared dearly for his niece and nephews.
Kevin was laid to rest beside his parents at Our Lady of Lourdes Cemetery at Couchiching First Nation.
Visitation was held Sunday, March 18, 2018.
The pallbearers were Marty Jourdain, Doug Perreault, Ron Davis, Dean Merillat, and Darren and Eric Morrisseau.
The honourary pallbearers were Warren Mainville, Nate Meshake, Rain, and his many friends around the world.