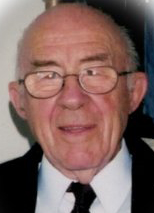 With deep sorrow, the loving family announces the passing of John Malverne (“Mal”) Steele, age 100, on Friday, Aug. 12, 2016 at Hogarth Riverview Manor in Thunder Bay, Ont.
Mal was born in Fort Frances, Ont. on Aug. 7, 1916 to John and Nellie Steele.
He met Hazel Harnett and they were married in 1941, building a life and family in Fort Frances.
Mal attended Teachers’ College in North Bay and spent his entire career with the Fort Frances Board of Education as a teacher, vice-principal, and supervising principal. He later became the first director of education in Rainy River District, retiring in 1975.
Following retirement, Mal didn’t quit. He started completing pieces of art–pencil sketches and oil and acrylic painting. Many family members have pieces produced by him.
He also enjoyed refinishing furniture and travelling with his wife and family. In his younger years, Mal was an avid singer, providing music for many weddings and events in the Fort Frances area.
One of Mal’s great accomplishments was establishing the Fort Frances Museum. Not only was he the original curator, but Mal collected, organized, and displayed many of the pieces that still are on display today.
Mal was a longtime member of the RTO and was a former president. He also was a Mason and involved with the Kiwanis Club in Fort Frances. Mal was a longtime member of Trinity United Church in Thunder Bay.
In 1990, Mal and Hazel moved to Thunder Bay to be closer to their daughter, Trudie, who was living here, and their son, Raymond, in Niagara Falls, both of whom were delighted to have more frequent access to their loving, kind-hearted, generous, and caring father.
He was a wonderful man with a fun sense of humour and will be deeply missed. The family’s thoughts of Mal leaving are “God took him home, it was His will, and in our hearts, he liveth still.”
Mal was predeceased by his beloved wife, Hazel; parents, John and Nellie; three brothers, Bob, Mervyn, and Glen; as well as his great-grandson, Nicholas Steele, and other relatives.
He is survived by his son, Raymond and wife, Johan; daughter, Trudie and her husband, Dennis LeBlanc; five grandchildren, Jana Steele (Nizam), David Steele (Rebecca), Sarah Vass (Scott), Michael Steele, and Scott LeBlanc; and five great-grandchildren, Amarah, Paul, Erica, Owen, and Lukas.
Also surviving are several dearly-loved nieces and nephews and their families.
A memorial service will be held on Wednesday, Aug. 17, 2016 at 11 a.m. in Trinity United Church in Thunder Bay, with Rev. Randy Boyd officiating.
A private interment will take place in Fort Frances at a later date.
Should friends so desire, in memoriam donations to Trinity United Church or a charity of your choice would be greatly appreciated.
Online condolences may be offered at everestofthunderbay.com