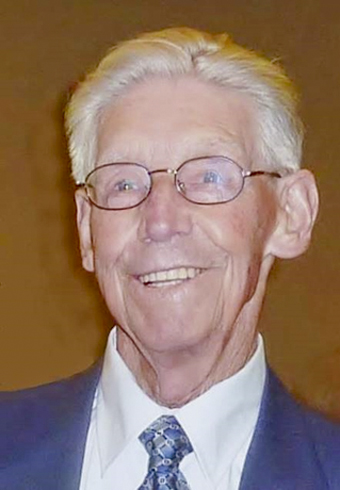 John Christopher Esselink went home to be with his Lord on August 31, 2020.
John was born November 24, 1924 in Barchem, Gelderland, Netherlands to Gerrit and Elisabeth (Lisa) Esselink; the third child of six, with two brothers and three sisters. During WWII, John hid from the Germans at his uncle’s farm since all Dutch boys over seventeen were required to work for the German army. Unfortunately, he was captured and forced to work in concentration camps in Austria and Russia until the war ended in 1945.
After the war he worked on the family farm, but he felt restless and in 1949 immigrated as a farm labourer to Stonewall, Manitoba. In 1950, he joined his uncle Arnold Kaemingh in the Rainy River District where he worked for Ontario Hydro and later Clover Valley Dairy. Happily, Linda Wielinga and her family also moved to the area and in 1954 they were married. They have enjoyed over 66 years together.
In 1957, they bought a dairy farm in La Vallee, Ontario, farming there for 30 years. Dad loved farming and enjoyed whistling while he worked! They were blessed with six children, nineteen grandchildren and thirty great-grandchildren. Church was an important part of their life and he served several terms as deacon and elder with the Emo Christian Reformed Church. Dad loved children, always having a smile and friendly word for them. His pockets were full of peppermints and they knew him as the ‘Candy Man.’ He made each of his grandchildren and great-grandchildren feel special and they have many memories of the fun and laughter he brought to the games he played with them.
Psalm 46 became a comfort to Dad during his difficult years in the war; he knew God was his refuge and strength, and a very present help in trouble. “The Lord will keep us wherever we go” was penciled on a piece of wood he found when he was being transported to a prison camp. He threw it out the train window and someone put a stamp on it and mailed it to his parents. Years later he wrote the story of his war years, titled “God Has Been So Good to Me,” as a memorial for his grandchildren to encourage them in their life journey. His heart’s desire was that they would know that God is with them wherever they go.
John loved his home here with his wife, family, and friends. He brought joy and laughter to everyone he met with his kind, encouraging and often teasing words. Yet, when it was time for him to go to his heavenly home, after 95 years of living a life well spent, his heart was ready to go and see his Jesus.
John, a devoted and loving husband, father, Opa, and Opapa is fondly remembered by his wife and family: Linda Esselink (Emo), Liz and Ralph Witten (Lethbridge, Alberta) and their children Laura, Karen and Matt Dyck: Naomi, Linnea, Kevin and Virginia: Cora, Megan, David. Jack and Wilma Esselink (Emo, Ontario) and their children Kris and Katy: Sam, Ethan, Caleb, Benjamin, Joanna, Jake and Jenna: Theo, Alida, Lauren, Kerrilyn and Brad. Gary and Betty Esselink (Devlin, Ontario) and their children Adam: Olivia, Gerrit, Austin, Luke and Marissa: Paisley (Devlin), Emily and Chris (Devlin). Grace and Duane Cridland (Fort Frances, Ontario) and their children Chez-Lyse and Roy: Sylas, Brody, Jasper, Christine and Tristin: Carter, Stacey: Mya. John Esselink (Alberton, Ontario) and their children Jarvis, Jesse. Irene and Kryn Van Loon (Jefferson, Oregon) and their children Ashley and Jeremy Zuidema: Kasey, Cole, Kinley, Cash, Ben and Melissa: Brantley, Paige, Easton, Tess, Jeremy and Terri: Jameson, Cailynn.
John is also survived by his sisters Alie and Lies (Cris), sister-in-law Wilma; predeceased by his parents Gerrit and Elisabeth (Kaemingk), sister Frieda (Lloyd) and brothers, Theo (Dien) and Johan (Johanna); as well as survived by Linda’s family: Klaas, Ann (Pete), Arend (Wilma), Ynske (Ted), Greta (Jim), Affie (John), Jack (Anne); predeceased by Jake and Grace Wielinga; Fred, Florence and Betty. John is also survived by numerous nieces, nephews and cousins.
Due to COVID-19, a private family funeral will be held on September 18, 2020 at the Emo Christian Reformed Church. If desired memorial donations may be made to Riverside Foundation – Emo Hospital or the charity of your choice. Arrangements entrusted to Northridge Funeral Home.