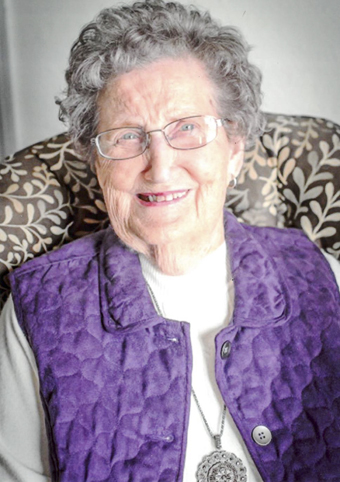 Helen Jane Brown was born on May 9, 1928 in Bemidji, Minn., to Arthur and Anna (Olson) Brown, the youngest of five children. She very quickly picked up the nickname “Honey,” which has stayed with her nieces and nephews to this day. Her mother died when she was five, and since her father was a lumberjack in Washington State, she was raised by her aunt, Tillie Noble, who owned a laundry in Baudette, Minn.

Helen had a keen interest and a talent for music and excelled in singing and playing the clarinet. As a freshman she was the first chair clarinet in the high school band, and the second chair clarinet player was a brash senior named Carl Curtis. Their relationship, though fiery at times, led to their marriage five years later.

She graduated from Baudette High School in 1946 and attended Business School in Minneapolis for one year. She and Carl were married on September 27, 1947 at First Lutheran Church in Baudette. Their first home was in Fargo, N.D., while Carl attended NDAC, received a pharmacy degree, and a commission in the U.S. Army as a second lieutenant. She endured long absences from Carl when he was previously in WWII, and then in Korea as an officer.

Upon his return, Carl joined the family business, Curtis Drug. Helen worked alongside Carl and eventually became the best pharmacy technician prior to such a job description.

Growing up during the depression made for lean times, so at Christmas she would go all out with decorating, cooking and presents.

Helen directed church choirs at First Lutheran for many years. She was an avid bowler, golfer with two holes in one, and was a voracious reader all her life.

She followed the Vikings, Twins, and especially the Wild.

Helen had an adventurous spirit, and two years ago at age 90, renewed her passport just in case she might want to go somewhere! A recent highlight for her was attending a high school concert on her 90th birthday, where she received a surprise recognition for being a Baudette high school graduate, alumni of the high school choir, and the outstanding band senior. She was given a standing ovation, and the crowd sang “Happy Birthday” to her.

Helen passed away of natural causes on Nov. 25, 2020 at Lakewood Community Hospital in Baudette.

She was preceded in death by her parents, siblings, her husband Carl, and grandson Travis.

A celebration of life will be held in the summer of 2021. Memorials may be given to the Baudette Humane Society, First Lutheran Church, American Legion Auxiliary or Baudette Grand Theater. The online guest book is at www.helgesonfuneralhome.com.