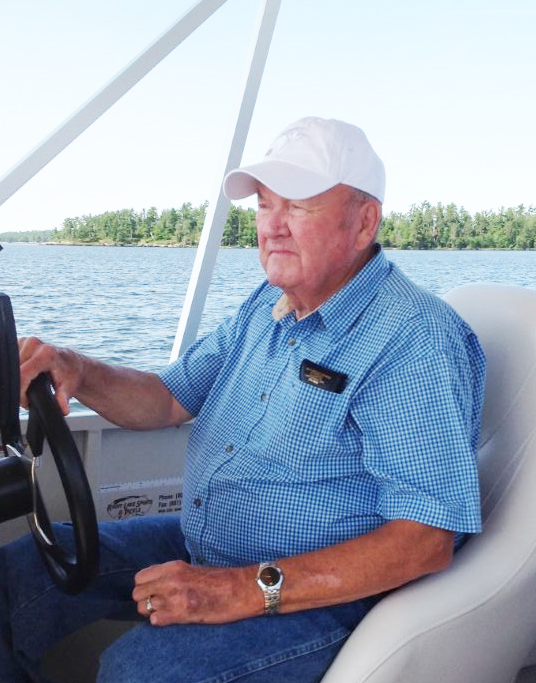 George Edward Supinski passed away peacefully at La Verendrye Hospital in the early morning of March 19, 2020 at the age of 74 years.
George was born in his grandparents’ house in Inverness, Scotland on June 14, 1945. He and his mother sailed to Canada on the Queen Mary in 1946 to join his father in Fort Frances. Their family grew with the addition of three daughters. George had many fond memories of growing up on the farm in Crozier where he learned farming skills from his father and his Uncle Stan. His love of gardening continued throughout his life and he spent every summer tending to his crop in the backyard, even crawling around the perimeter to weed the edges! He also had many fond memories of growing up on Th ird Street West in town. As a young man, he was a member of the Sea Cadets and had the opportunity to travel to Comox, British Columbia for training camp. He delivered newspapers and oft en shared stories about how far he had to walk, the weather he dealt with, the amount of money he made and the things he could buy with it. His stories were always entertaining. George joked that he knew more than his teachers so he left school early to start his working career.
George worked with his Uncle Stan in the logging camp at Crilly for a time. While working in the Mando camp in Atikokan, he met Alphonse McPherson, who thought George was a nice young man.
Th en, in 1966 George met the love of his life, Marie McPherson, Alphonse’s daughter. They were married on November 22, 1969 and recently celebrated their 50th wedding anniversary. He enjoyed being part of Marie’s large family. George and Marie started a family in 1975 and he was a wonderful father to their three kids. He taught his children many life lessons to help them become successful adults. Whenever they see a job that has been done less than perfectly, they joke that the person responsible obviously didn’t attend the “George Supinski School of High Standards and Practices”.
He was very proud of the achievements of his children.
George was a loyal friend to many. He enjoyed going for coffee twice a day with his friends and never missed a chance to tease the waitresses. He was like a genealogist when it came to discussing people of his generation and older in the surrounding area. Going for a drive in the country was a lesson on who owned the property being passed and who their parents were. His friends knew he could be counted on to remember everyone’s name. He never forgot anyone. He looked forward to Thursday lunch at the Sister Kennedy Center with the many friends that met there each week. George was a generous man, whether he was lending cash to a coworker until payday or donating to Riverside Healthcare, Thunder Bay Regional Health Sciences Center, Salvation Army or the many associations he gave to annually, he always believed in helping others and giving back to support a good cause.
George held many jobs in his early life, mostly driving a truck, including his own for a time. For over 25 years before retirement, he worked at the Town of Fort Frances Public Works department, first as a bus driver and later as an equipment operator. He was an active member in the CUPE union and traveled to represent his fellow members. He was a proud member of Legion Branch #29 and sold 50/50 tickets for many years, selling the winning ticket a few times.
George had a keen interest in history and geography and enjoyed travelling to see different places. He was able to visit relatives in Inverness, his uncle in Australia, as well as go on trips to Mexico, Hawaii, and throughout Canada and the United States.
George was predeceased by his parents, Edward and Johan (Reid) Supinski, his in-laws, Alphonse and Frances (Hill) McPherson, his three sisters, Mary Kuharski, Joan Supinski, and Ellen Mihichuk and his beloved uncle, Stanley Supinsky, as well as his brother-in-law, John McPherson and sister-in-law, Betty Derendorf.
He is survived by his loving wife Marie Supinski, his children John (Anna), Karen (Clint), and Sheryl, his grandsons Nolan, Owen, and Liam, as well as his fur-grandson Nixon, brothers-in-law Jim Carr, Bob Irvine, and Randy Mihichuk and numerous in-laws, nieces, nephews and special friends.
A service to celebrate George’s life will be held at a later date. He will be interred at Our Lady of Lourdes Cemetery on Couchiching First Nation.
If friends so desire, donations to the Canadian Diabetes Association or to the Heart & Stroke Foundation of Canada would be appreciated.
Rest now
and until we meet again…
we love you,
and we do and we do. ❤