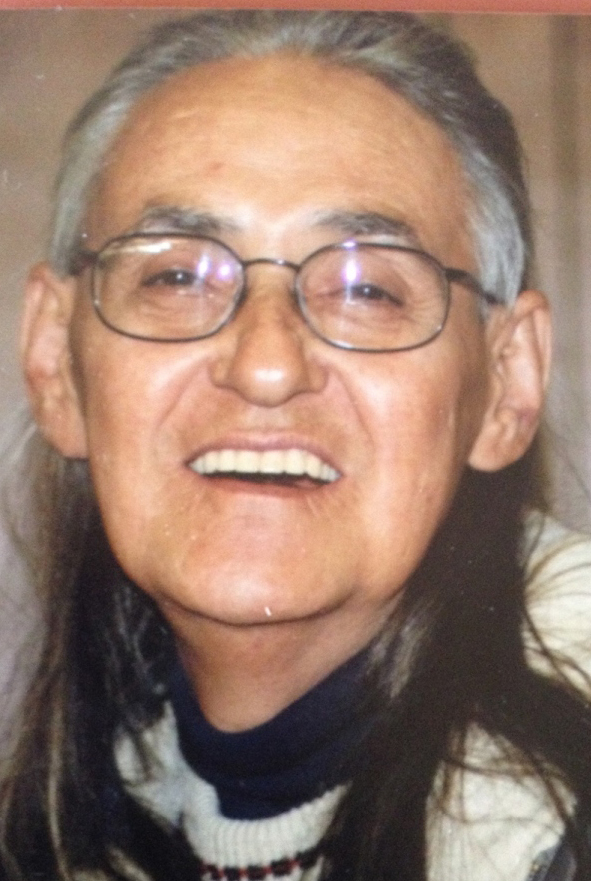 With the deepest of regrets, we mourn the loss of our beloved brother in Christ, George Stephen Benjamin Baldwin, 61, of Fort Frances, Ont., who unexpectedly went home to his Lord & Saviour Jesus on Tuesday, April 12, 2016.
Thankfully, his last wish was fulfilled as he was surrounded by many family and friends at his passing.
George had many different talents, which he implemented throughout his life in various types of employment, as well as serving his family, friends, neighbours, and communities of Rose and Green Manors.
Most recently, he kept himself occupied serving those who requested his abilities in the field of hairdressing, as well as assisting his nephew, Ryan Parisen, in the business of cooking and catering.
This same talent was lovingly offered as a service for Christmas dinners to his home community of Rose Manor.
He also loved animals, and recently spent time dog-sitting and dog-walking for those who needed his help. Household cleaning, organizing, landscaping, and gardening for others and friends in his home community also were a few of his many gifts.
Of course, along with the above mentioned, George had a strong forte for interior style decorating, which anyone would notice just by walking into his home.
He extended this specialty into the halls of his community throughout the year but it was most noticeable during the Christmas season, where these talents shone through in every corner and entry way.
In his less recent past, George also spent time serving others while working as a personal support worker and caregiver in a home for the “aged.” As well, he was trained in the business of a construction/carpentry worker all while living outside the Fort Frances area.
However, last but not least, we cannot forget his excitement of having served a number of celebrity figures during his beginning years in the field of hairstyling!
Most important, his days were spent blessing and serving all those he came in contact with, accepting everyone for who they were and allowing them to be themselves. He had a knack for making others feel relaxingly comfortable in his company, and we all knew him to be loving and generous to each individual’s life situations, no matter how difficult, with an open, non-judgmental ear.
He was a true friend!
George was predeceased by his mother, Vivian M. Baldwin (nee Calder) and father, Sydney Baldwin; step-father, Napoleon Pepin; step-mother, Margaret Baldwin; as well as his younger sister, Baby Baldwin, at birth.
He is survived by his wife, Beverly Baldwin (nee Sabadoz), whom he married on Oct. 1, 1979; his children, Vivian Baldwin, Stephen Baldwin, and George Baldwin; and grandson, DJ Baldwin, all of Burlington, Ont.
Many times he mentioned how proud he was of each one of them.
George also is survived by his best friend and sister, Diane Parisien (nee Baldwin); nieces, Renee and husband, Tony Richards, of Stratton, Ont. and their daughters, BriAnne and Brealyn, and April Deveau and her children, Blake and Morgan; and nephews, Ryan Parisien and wife, Cora (nee DeGagne), and their sons, Trayden Thomson, Tyson, Seth, and Carter, and Brock Parisien and fiancée, Jenna Allison, and their children, James and Karmella, all of Fort Frances, Ont.
A celebration of life service will be held Friday, April 22, 2016 at 2 p.m. at the Apostolic Way Church in Fort Frances (on the corner of Victoria Avenue and Church Street), with Pastor Sean Ward officiating.
If family and friends wish, a love offering/donation in honour of George may be made to Psalm 99.5/KBHW Radio c/o Green Funeral Home, P.O. Box 427, Fort Frances, Ont., P9A 3M8.
There also will be an open microphone at his celebration service for family, friends, and loved ones to share stories, memories, and thoughts in honour of George’s life.
Online condolences may be offered at www.greenfuneralhomefortfrances.com