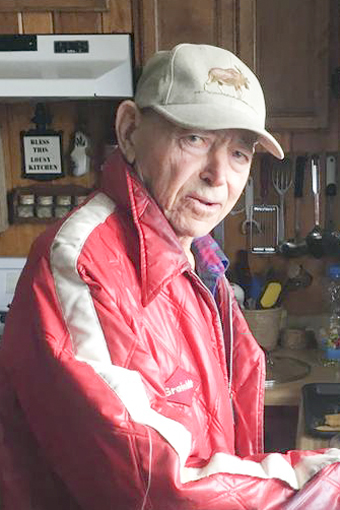 Sadly the family announces the passing of Frank Szeder Sr, 88, of Chapple Twp, Ontario on Monday, August 24, 2020 at the La Verendrye Hospital Fort Frances.
Frank was born in Isazeg, Hungary on May 5, 1932 to parents Istavan and Maria Szeder. He came to Canada during the Hungarian revolution of 1956. He was united in marriage to Ingeborg Sadjak in 1962. They purchased a farm in Mather Twp, where Frank remained until his passing.
Frank tried his hands at many things over the years which included logging, guiding, owning a sawmill and two tourist lodges on the Keeper River system. He always returned to his love of farming.
He and Inge enjoyed travelling to various sport shows in the midwest while meeting clientele that would become the extended family. After the sale of the lodges they travelled back to Europe many times reacquainting with many family members.
Frank always had stories to tell and if you had time for one he would oblige you on many.
Frank was fiercely a strong believer in his family. He challenged them to question and to do better.
To those that knew him, he loved telling; that he was the jack of all trades master of none… except farming
He will be greatly missed by his children Monika (Dan), Frank Jr, (Yoyen), Stefan (Sherry) and Johny (Lindsay), his grandchildren Robert (Jocelyn), Joey (Adrianna), Samantha, Frankie, Michael, Carson, Brady, Parker,Ashlyn and Preston and great grandchildren Olive and Maeve.
As per Frank’s wishes cremation has taken place. Family and friend are invited to join in remembrance at the family farm on September 26, 2020 at 2 p.m.
If desired memorial donations may be made to Riverside Foundation by cheque c/o Northridge Funeral Home, Box 89, Emo, ON P0W 1E0.