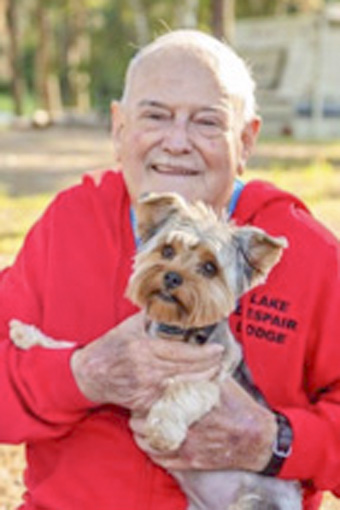 Eugene Joseph (Buzz) Grennier passed away peacefully on Friday, March 20, 2020.
Buzz loved his family, especially his wife Marie -she was his Mama Bear and he was her Boo. Together they have seven children, fifteen grandchildren and six great-grandchildren. He was proud of each and every one of them.
He was born in Carpenter Township on the family farm on April 3, 1936, Buzz grew up in the Rainy River District. His sense of adventure started as a young boy, growing up on his family farm in Devlin. His sense of adventure stayed with him his entire life. He was always planning for the next big trip, fishing and camping adventure, or family get together. In his motor home with kids and Marie in tow, he traveled from one coast to the other, fishing, camping and visiting family along the way. When their kids grew up, he and Marie wintered 29 years in Florida, where they had many adventures and made great friends.
He had a tremendous sense of humor, with joke for every occasion- especially when sitting around the campfire. He was known as a bit of a prankster -those of you who worked with him were probably pranked a time or two!
Buzz was a master tradesman, he was a licensed plumber, millwright and Machinist. He worked in Atikokan at Caland Mine as a Millwright then apprenticed as a Machinist. In 1975 Buzz moved his family to Fort Frances, and took a job as a Machinist at Boise Cascade. He worked as a Machinist until he retired in 2001. He loved going to work early every day and took tremendous pride in all that he did.
Buzz had the kindest heart and was always an optimist. He maintained that optimism throughout his illness. He was certainly an example for us all. Buzz had a special place in his heart for his family and friends particularly for his baby sister Joyce, and his Cousin Raymond. For all that knew him, you knew you were a friend if he called you “little Jigger”.
Buzz is survived by his wife Marie; children Victor (Twila) Stamler, Peggy (Dean) Bruyere, Carrie Lynn (Pat) Murphy, Carey (Bev) Grennier, Peter (Kim) Gardiman, Dina Gardiman; grandchildren Kyle (Shelly) Stamler, Aaron (Brittany) Stamler, Cody Stamler, Jasmine Jordain, Kobe Gardiman, Judd (Sabine) Gardiman, Kayla Gardiman, Mike Murphy, Ava Gardiman, Spencer Murphy, Izzy White, Jordan (Chad) Leimenstoll, Calliegh Grennier, Chrisitan Grennier, Justin Grennier; great-grandchildren Drew, Kasey, Avery, and Emmy, Ethan, Ellie; his sister Joyce Lalond; and his many cherished nieces and nephews.
Buzz is predeceased by his Parents, Ezra and Ida Grennier, his brothers Ted Grennier, Allan Grennier, Jerry Grennier; and his son Percy Stamler.
Cremation has taken place and a celebration of Buzz’s life will be held this summer.
If friends so desire in memoriam donations may be made to the Kidney Foundation c/o Green Funeral Home, Box 427, Fort Frances, ON, P9A 3M8.
Online condolences may be made in care of www.greenfuneralhomefortfrances.com.