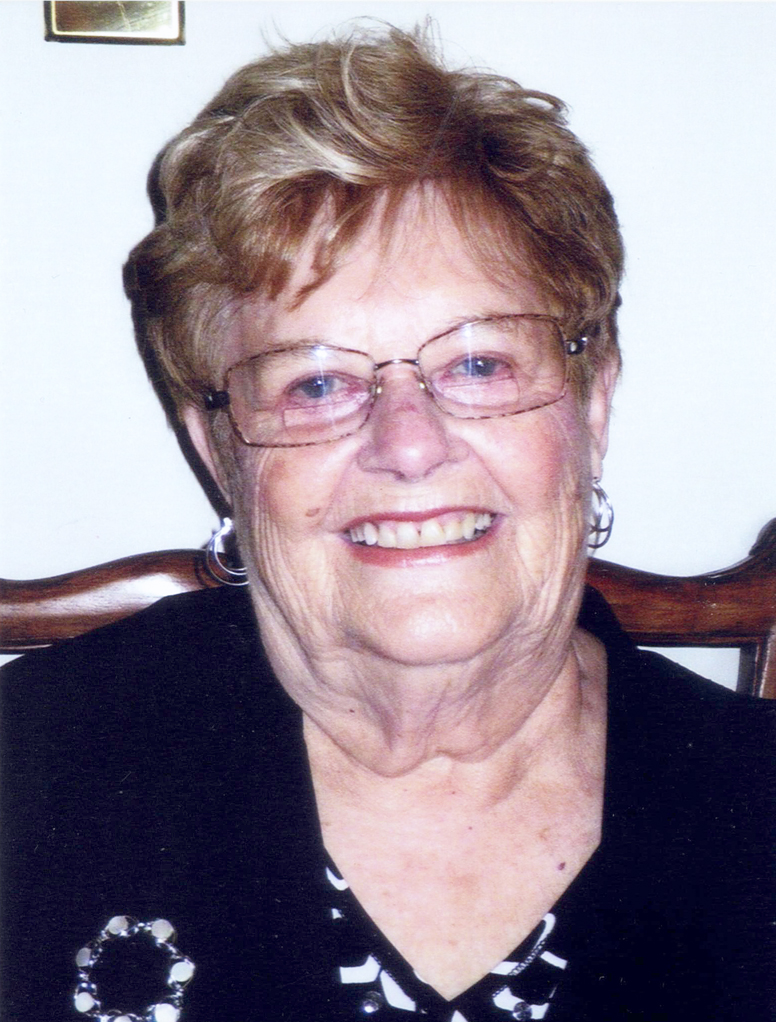 It is with great sadness that the family of Elva Ossachuk announces her passing, with family by her side, on Friday, August 31, 2018.
Elva was born on October 5, 1926 in Kingsford Township to Frederick and Mabel Hendren and was the youngest of six children. She grew up in a loving, hardworking family household and attended the country school – a long walk from her home. She, her family and their home, survived the Dance fi re of October 1938. She and one sister were evacuated in the back of a truck to Fort Frances, leaving her parents behind as they refused to abandon their homestead but rather remained in the path of the fire, making every effort to save it.
She left home at the young age of 16 years, and moved to Manitoba where she worked in Selkirk and then Winnipeg. During the Second World War, she travelled to Toronto and resided in the Women’s Staff House while she worked in the Small Arms Plant which manufactured ammunition to supply the troops of the Second World War.
At the war’s end, she returned home and took up residence in Fort Frances. She was employed by the town of Fort Frances as a telephone operator – she was the pleasant voice that said “number please”. She met George Ossachuk on his return home to Fort Frances after serving in the Navy during the Second World War and they were married on August 6, 1947. Their only son John Gordon, was born in 1949. She spent the next several years as a devoted and loving “fulltime” mother – packing the picnic basket for the fishing trips on their boat the “Elvie”, baking in preparation for the many weekends spent at the Munro farm or taking Johnny walking to visit with her family and friends.
She eventually returned to the work force, initially as a clerk at the Trading Post and then to Betty’s ”the store for women who care”, where she remained employed until her retirement. The “boys” at Betty’s were heard to comment that she could sell ice cubes to Eskimos – and she could!
Elva enjoyed her home, cooking and baking (and she was so good at it), tending to her flower gardens, reading and entertaining friends and family. She loved to shop and the phrase “shop ‘til you drop” could have been coined for her. She loved clothes and shoes and no matter where she went, she always looked “well put together”. She was an avid curler and member of the Fort France’s Curling Club. She swept the ice like she did the fl oors in her home – with much enthusiasm! For many years, she and her group of friends met regularly for Birthday Club – she always looked forward to those evenings with good friends and great food.
What brought her the greatest joy was her family, especially her grandchildren Kyleigh and George.
“Gramsey Elvsey” was always a part of all they did – taking them to the library, attending Christmas pageants, ice shows, hockey games, going out for “treats” and even teaching them to drive.
She, herself, started driving later in life and then never stayed at home. She could be seen out and about with her sister Bernice, her friends or her grandchildren – one riding “shot-gun” and one in the back seat, both telling her where to go.
She was an active member of the Knox United Church and for many years, a member of the Hospital Auxiliary.
Elva was predeceased by her parents Frederick and Mabel Hendren, her brothers Hilliard and Gordon, her sisters Ellen Munro, Laura Kjerstad and Bernice Miller, her mother-in-law and fatherin-law Thomas and Polly Ossachuk, sister-in-laws Mary Andrusco and Olga Wihnan, brother-in-law William, a special niece Janice Ross, her husband George and her son John.
Mourning her loss, she leaves her daughter-in-law Susan and grandchildren Kyleigh and George, sister-in-laws Jennie Sockolotuk (Stan) and Doris Ossachuk and brother-in-law Nick Wihnan. Aunt Elva will be missed by her nephews – the “Munro boys” and their families – Jackie (Geraldine), Keith (Gail), Don and Jimmie (Mary) as well as by John Ross and numerous nephews, nieces, greatnephews and great-nieces.
Cremation has taken place. A celebration of Elva’s life will be held at Green Funeral Home on Thursday, September 6, 2018 at 1 pm with Reverend Diane Clifford offi ciating.
Serving as Honorary Pallbearers will be Kyleigh Ossachuk, Bertha Ossachuk, Marcie Zeleny, Anita Sakiyama, Geraldine (Dean) Munro, Tammy Hutchinson and Val Hallam. Pallbearers will be George Ossachuk, Jack Munro, Keith Munro, Don Munro, Jimmie Munro and Snooks Armstrong.
In lieu of other tributes, in memoriam donations may be made to Canadian Mental Health Association – Fort Frances Branch Box 446, 612 Portage Avenue Fort Frances, ON, P9A 3M8 or Canadian Cancer Society 1093 Barton Street Thunder Bay, ON, P7B 5N3.
GRANDMA – one single word that holds a million happy memories which we will treasure in our hearts forever.