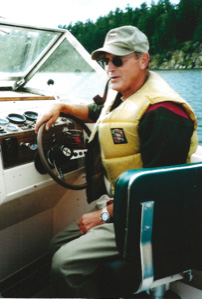 Edward Frederick Haglund drew his last breath in the calm after a tremendous thunderstorm on the morning of Tuesday, July 9, 2019. He was surrounded by love.
Eddie would want you to know that he was blessed beyond measure in this life and wanted for nothing beyond more time with his beloved wife, Rosemary, daughter, Ashlyn, son, Stephen, their respective partners, Darrell and Jacquelyn, and his precious grandson, Carter, born to Stephen and Jackie in 2017.
Dad was born in Glasgow, Scotland on Dec. 5, 1943, and immigrated to Canada with his mother in 1946.
His parents, Harold Haglund and Catherine MacKenzie Haglund, raised Ed and his younger brother, Paul, in Fort Frances.
In the early years, they lived in bush camps or near the Shevlin sawmill, managed by his grandfather.
As a boy, Eddie loved to help George Ross and Mabel Flinders tend garden and made rounds to shovel snow, do chores for neighbours, and care for his rabbits after his paper route.
As a young man he fought forest fires and cut pulp in Sapawe.
Before his 18th birthday, Dad enlisted in the Royal Canadian Navy and served as a member of the deck crew aboard the majestic-class aircraft carrier HMCS Bonaventure.
He helped build an addition to Rainycrest after his tour of service and while there got hired on at the paper mill. He retired 37 years later as a spare boss machine tender.
An active Navy reservist and member of the Canadian Naval Air Group throughout this time, he earned the rank of Lieutenant and received several commendations.
For 22 years he mentored youth, taught sailing, music, and leadership across the Rainy River district as a senior officer for the #144 Fort Frances Sea Cadet Corps.
Rosemary and Eddie married on May 27, 1967. They partnered and supported each other in all things great and small for over 53 years.
On an early canoe trip they fell in love with a sheltered beach in the north arm of Rainy Lake. The cabin they built on that spot holds countless family memories.
They saved their pennies for travel farther away too, and took several big trips back across the Atlantic including a second honeymoon aboard the QE2.
In addition to a large garden, Eddie cultivated a Manitoba Maple grove at the edge of town and was eager to share a bottle of syrup with anyone who expressed curiosity or needed a prize for a local raffle.
Eddie wanted people of all ages to know they were valuable and that their contributions to community were appreciated.
This was most apparent in his commitment to fellow workers and retirees of the mill, the La Verendrye Hospital Auxiliary, and the Royal Canadian Legion.
As a lifetime Legion member, he served in many capacities, including as service officer, public relations officer, vice-president, sergeant-at-arms, poppy chairman, and branch president.
Dad was very close to his late mother-in-law, Madelyn Manley (John) and dearly missed his late cousin, Barb Gustafson (nee Nadon).
He was dedicated to numerous other members of his extended family. In Scotland, he is survived by his sister, Joan (Eddie), and brother, Duncan (Hilda), and their families. In Canada, he is also survived by Paul’s children.
A funeral mass will be held on Friday, July 19 at 11 a.m. at St. Mary’s Roman Catholic Church.
A luncheon will be provided by the Legion Women’s Auxiliary and served by members of the St. Mary’s Funeral Committee in the church hall.
Should friends so desire, in memoriam donations may be made to the palliative care program funded through Riverside Foundation for Health Care, 110 Victoria Ave., Fort Frances, ON, P9A 2B7.
Online condolences may be made in care of www.greenfuneralhomefortfrances.com.