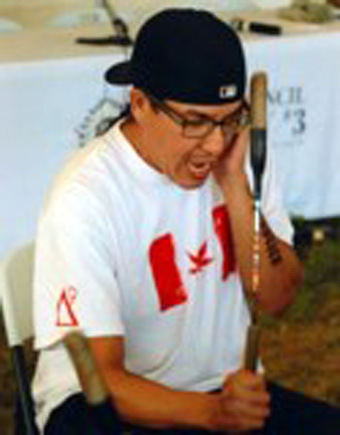 It is with profound sorrow and sadness to announce the sudden passing of our beloved David Robert Yerxa–our son, father, brother, uncle and beloved partner.
David was born in Fort Frances, Ont. to Donna Perrault (nee Yerxa) and David Bull of Lac Suel.
He will be dearly missed by his parents, Donna and Bill Perrault; daughters, Justice, Charlee, Chloe and Myranda; sisters, Tracey (Keith), Connie (Rob), Shari (Joe) and Ashley; his special family, Pat and Eldon Copenace, and sons; his beloved “ole lady” Rachel Copenace and her children, Phoenix, Carson and Lydia; as well as his Agency 1 “Bros” and his Long Plain family and numerous nieces and nephews who he cherished.
David had many passions throughout his life, singing and pow wows was his upmost favourite. Sitting around the drum was where he was his happiest.
He was an avid firefighter with the MNR for many years and was an excellent athlete and excelled in sports in his younger years.
As David makes his journey home he will be welcomed by his father, David Bull; grandparents, Hilda and Robert Yerxa; aunts, Marlene, Peggy, and Judy; uncle, Ron Yerxa; baby brother, Ron Perrault; and greeting daddy home, Baby Yerxa and Baby Copenace.
David had a smile that can light up any room, a sense of humour like no other.
He had a constant yearning to learn and understand new things and had his own way of sharing that knowledge, along with his gift of creating and sharing his teachings of the hand drum and beading.
“He is a voice that will be greatly missed throughout the Pow wow country”
Traditional wake will be held on Thursday, Aug. 22, 2019 at 5 p.m. at the Couchiching First Nation Multi-Use Building.
Traditional service will be held on Friday, Aug. 23, 2019 at 10 a.m. at the Couchiching First Nation Multi-Use Building with Elder Gilbert Smith of Naicatchewenin officiating.
Pallbearers will be The Agency 1 Drum Group.
Honourary pallbearers will be David’s beloved nephews, Terrell Mosher, Logan Yerxa, Ethan Leimenstoll, Bentley Mainville, Ziigwin Yerxa, Clayton Corbeil, and Corin Copenace; and step-son, Phoenix Copenace.
If friends and family so desire, donations may be made to the Seven Generations Education Program.
Online condolences may be made to www.greenfuneralhomefortfrances.com