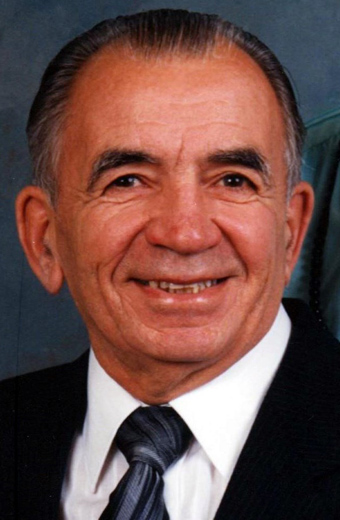 Claude DeBenedet, 95, of Fort Frances, Ont., passed away Monday, Oct. 31, 2016 at Rainycrest Long-Term Care in Fort Frances with his children by his side.
Claude was born on April 4, 1921 in Fort Frances to the late Angelo and Enrica DeBenedet. He attended school and lived most of his life in Fort Frances.
He served his country during World War II, both in Canada and overseas, for more than five years. It was when he was returning home to Fort Frances, by train, that he met the love of his life, Helen Homenuik.
Claude and Helen were united in marriage on Feb. 4, 1946.
Claude worked in the local paper mill as a mason for 43 years. He spent countless weekends over the years, either pouring cement for basements or helping build a fireplace for many of the homes in and around Fort Frances.
When he wasn’t doing that, Claude was entertaining at many different functions–from weddings to dances at Rainycrest. Dad played the piano and guitar, but was best known for playing the accordion. He entertained many family and friends with his accordion, at their homes and even when they were camping.
Claude also was a 4th Degree member of the Knights of Columbus. He was a member of the KCs for more than 65 years.
He was predeceased by his wife, Helen; one son, Claude Michael DeBenedet; his parents, Angelo and Enrica; and his sister, Rose Dickson, and her husband, Ken.
Claude leaves behind his son, Don DeBenedet and his wife, Dianne, and their daughter, Dayna; two daughters, Janice Maxwell, husband, Wayne, and their children, Andrea (Ken) Faragher and Brad (Bobbi), and Teresa McFayden, husband, Jack, and their children, Scott (Kiley Myles) and Michelle McFayden (Zach McCool); great-grandchildren, Asher and Kendyn Faragher; and special family member, Amy Wreggitt.
Also surviving are two sisters-in-law, Kay Tones and Jennie Hemstad; and numerous nieces, nephews, and cousins.
A memorial mass will be held Friday, Nov. 4, 2016 at 11 a.m. at St. Mary’s Roman Catholic Church in Fort Frances, with Fr. Alan Albao officiating.
Interment will take place in the Holy Cross Cemetery in Fort Frances.
An honour guard will be provided by the Knights of Columbus.
If friends so desire, in memoriam donations may be made to either Rainycrest Long-Term Care, 550 Osborne St., Fort Frances, Ont., P9A 3T2 or the St. Mary’s Church “Roof Fund,” 209 Victoria Ave., Fort Frances, Ont., P9A 2B9 or c/o Green Funeral Home, P.O. Box 427, Fort Frances, Ont., P9A 3M8.
Online condolences may be offered at www.greenfuneralhomefortfrances.com