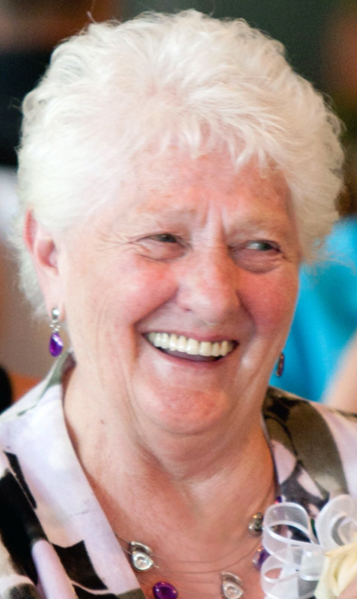 It is with heavy hearts that we announce the passing of our loving mother, grandmother and great-grandmother. Chris was a loving, kind, passionate person with a great sense of humour.
Crestina Asunta Dittaro (Lovisa) Lowe passed away on Sept. 14. 2019 surrounded by family.
Chris was born to Orsolina (Lina) and Giovanni Dittaro on March 5, 1935. A beautiful daughter after four sons, she brought much joy and laughter to her family.
She was educated in Fort Frances and worked for Dr. Solomon and Dr. Boyle following graduation from high school.
Later in life, she worked for Herman and Evelyn Metke at the Clinic Dispensary. Her last years of work were at St. Mary’s Parish as the secretary.
Chris met and married Don Lovisa on Nov. 27, 1954, who predeceased her on Nov. 2, 1973. Together they had five children.
She then met and married Alan Lowe on Oct. 10, 1981 and spent 33 years together. Al predeceased her on May 2, 2014. She often would say how fortunate she was to have had such wonderful husbands who loved and cared for us.
She was predeceased by her parents, Lina and Giovanni; and brothers, Enrico (Henry), Enzo, Angelo and Fred.
Chris served on many boards and committees through the years and gave generously of her time volunteering. She was a charter member of NU PHI MU Sorority, actively canvassed for the March of Dimes and the Canadian Cancer Society.
She served on the St. Mary’s Church, Flinders Place and Rainy River Housing Authority Boards.
She was a charter member of the Fort Frances Search and Rescue Group, a member of the multi-use committee that saw the completion of the new high school, Confederation College and Townshend Theatre. Chris also collected the pledges and donations for Ice For Kids, a role that she was very proud of.
She would tell you that her greatest inspiration in life was in 1973, and was a result of the community response to the search for late husband Don Lovisa. The many acts of kindness from family, friends, the community would never be forgotten.
She volunteered at the schools for both her children and grandchildren, worked at the Rainycrest Tuck shop and helped at the FFHS Chem Free Grad parties for her grandchildren.
She could be seen serving ice-cream at the Strawberry Social and was a co-ordinator for St. Mary’s Funeral Luncheon Committee. She joked with Father Alan before she passed as to who was going to plan her luncheon! She kept her sense of humour right until the end.
Chris loved to sing and was a member of St. Mary’s Church choir for the last 40 years and the Choraliers for 20. She was always proud to be in the annual Cantata celebration. Singing with the groups brought her great joy and she cherished the close friendships that were made. We were so proud of her.
Chris had the personality and joy of life to relate to all ages, young or old. Although the last year was difficult healthwise for Chris she still kept participating and always worried about everyone else and not herself
She is survived by children, Karen (David) Egan, Don (Cheryl) Lovisa, Diane Lovisa, David (Carla) Lovisa, and Barb (Claude) Jodoin.
She was blessed with 15 grandchildren and 22 great-grandchildren. She is also survived by her sister-in-law, Doris Dittaro (Fred) of Prince George, B.C.
Chris loved the game of hockey and spent over 60 years as a fan and supporter to her boys, her grandchildren and lately, her great-grandchildren.
She often reminisced about the ’52 Canadians Allan Cup championship.
She attended almost every sporting event, festival, school concert and graduation that her family was involved in.
Chris loved to sing and dance and often reminisced about her younger years and the dances she attended, along with all the boys who were the great dancers, including “Lovisa.”
Learning to play bridge turned into a passion for her and her friends. They laughed, loved and spent many special times together.
Nothing made Chris happier than being surrounded by her family and friends and sharing an often noisy, chaotic but always wonderful gathering. Many a meal was shared and enjoyed.
Her final words were about family, love and taking care of each other.
A memorial mass was held on Wednesday, Sept. 18, 2019 at 2 p.m. at St. Mary’s Roman Catholic Church in Fort Frances with Father Alan Albao officiating.
The pallbearers were Chris’ grandchildren.
The honourary pallbearers were The Bridge Club.
An honour guard was provided by the Catholic Women’s League.
In memoriam donations can be made to purchasing a new piano for St. Mary’s Church.
Online condolences may be made in care of www.greenfuneralhomefortfrances.com.