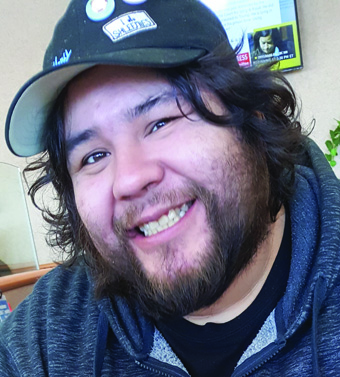 It is with deep sorrow that the family of Chuck Windego announces his sudden passing on Thursday, November 19, 2020 at his home.

Chuck was born on October 28, 1990 in Fort Frances, Ont. to Charlie and Sandra Windego. Chuck spent his early years in Nigigoonsiminikaaning First Nation before moving to Couchiching First Nation – which remained his home for the rest of his life. He worked as a Bingo Caller at the Couchiching Bingo Palace. He developed a friendly rapport with his customers, and will be greatly missed for his lighthearted teasing, his contagious smile, and his personalized birthday wishes to his customers and coworkers. Chuck’s favorite pastimes included; watching his favorite hockey team the Philadelphia Flyers, watching Saturday Night UFC events with all his friends, attending concerts and gaming alone or with his son Isaac. Chuck was gifted his spirit name Nay Toh Beh Tong when he was just a baby and he was a member of the Lynx Clan. As a young boy he could be seen chasing his grandpa Emil and grandma Melvina down the road as soon as he seen their boat pull out of the driveway, spending summers fishing and just following them to the cabin. Chuck grew up in a big family, he was the middle son of eight children – he loved his family deeply and would do anything for each and every one of them. Chuck was the kind of funny character who would often bestow a loving nickname to you if you made it into his inner circle of close and dear friends.

But the greatest gift Chuck ever received from Creator was his son, Isaac James Windego. The day Isaac was born changed his life forever – he was so proud when Isaac made his arrival on June 5, 2016 and he commemorated the moment with a chinny and became the dedicated father who would do anything for his son. You could see them together at many events, like baseball games, pow-wows and at the lake teaching his son to swim. There was another side to Chuck that hardly anyone got to see – his partner Hannah got to see his true authentic self on full display in the privacy of their home. They had a deep and meaningful connection that only few of us are lucky enough to find. Chuck would often serenade her with songs like; ‘Don’t Want to Miss a Thing’ by Aerosmith and ‘Here Without You’ by 3 Doors Down, that truly was worthy of his nickname Cheese Ball. His love and passion for family were shown through his actions and not just his words, often surprising them with presents and tokens of his affections, making a grand gesture for them. Isaac and Hannah never had to ask for anything as long as Chuck knew what their hearts desired. Charles had a love for the golf game, and he was not for his putting skills and was an asset to any team he played on. Family was important to him; he would often organize family golf scrambles for bragging rights to see who was the best golfer in the family – and his team would usually come out on top.

He was also community oriented. A cause that was near and dear to his heart was raising funds for Kids Hospital in Toronto through participation in the polar plunge challenge. Sick Kids hospital is where his son Isaac had received surgery for his cleft lip and pallet and that year Chuck was awarded for the most money raised by an individual for his cause.

A traditional wake will be held on Tuesday, November 24, 2020 from 4:00 p.m. at the Couchiching First Nation Recreation Centre. A traditional funeral ceremony will be held on the morning of Wednesday, November 25, 2020. COVID-19 Restrictions will be followed including limiting guests to a maximum of 50 attendees and asking everyone to wear a mask and practice social distancing. Out of respect for community members the family asks that anyone not feeling well or anyone that has recently returned from travelling out of the country to please not attend. Chuck would not want to risk anyone’s health so please be mindful and respect Public Health’s guidelines.

If friends so desire in memoriam donations may be made to the Epilepsy Foundation c/o Green Funeral Home, Box 427, Fort Frances, ON, P9A 3M8.

Online condolences may made in care of www.greenfuneralhomefortfrances.com.