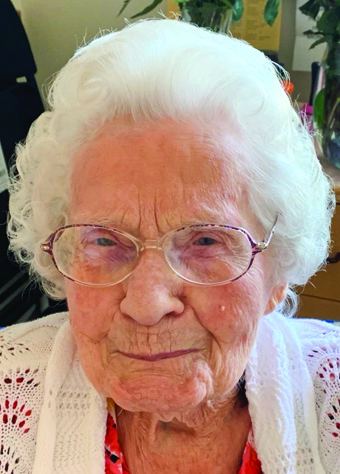 The extended family and friends of Cecilia (Cis) McComb announce her peaceful passing at the long term care unit of Emo Health Centre. She was granted her wish that the Lord take her home on November 13 at the age of 107. Cis was predeceased by her husband Elwood (Dool) McComb in 1979 and her only son John (Jack) in 2010.

The daughter of John (Jack) King and Margaret Bullied born on May 29, 1913, Cecilia was the fourth of seven children (Hilda, Dache, Cecil, Stephen, Edna, Bill, all deceased). Left to cherish her memory are numerous nephews and nieces, descendants of the King, Bullied and McComb families, including godson Len Haines, goddaughter Elaine ( King) James, and special cousins, Norma Reather and Tom Kallstrom to whom she was “Aunt Cis”.

Cis was born on the King dairy farm north of Emo, and lived her whole life in the Rainy River district. She married Elwood McComb in 1947, and lived her life as a devoted wife and mother. Some of her most cherished memories come from the years she spent with Dool living at Morson Park on Lake of the Woods. But Emo was always her home, the place where she put down deep roots in the community.

Cis served on the hospital auxiliary and the planning committee for the construction of the Golden Age Manor in Emo, where she became one of its first residents. She made many wonderful friends over the 26 years she lived there. In 2013 at age 100, Cis lived the vision of the continuous care model of the Manor, moving from her apartment to the Long Term Care Unit.

Cis was seen by all who knew her as a kind and loving person, one who was always sustained by a deep faith in God. She was “Aunt Cis” to many, family or not. She spoke ill of no one, lived life with enthusiasm, and kept us laughing with her sharp wit and sense of humour.

We extend special gratitude to Patty Labbe, “the daughter I never had,” who watched over her as a friend and helper, for many years.

Due to COVID-19 restrictions, a memorial service will be held at a later date.

Donations in memoriam can be made to Emo Health Centre by cheque, c/o Northridge Funeral Home Box 89, Emo, ON P0W 1E0.

Online remembrances can be made on the Northridge Funeral Home website at www.northridgefuneralhome.com.