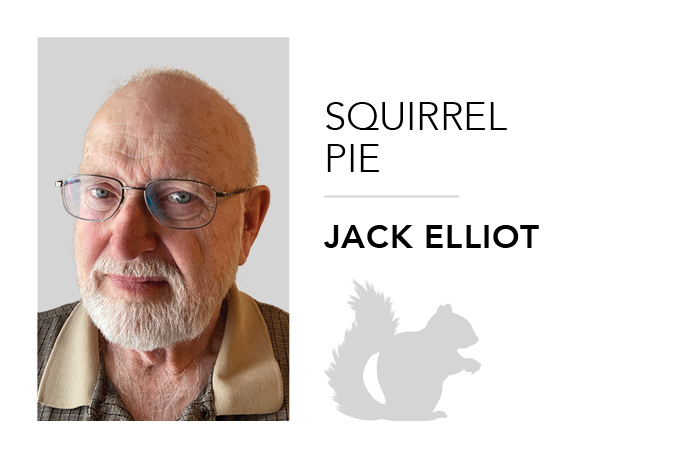 Today, April 12, 2021 is the 52nd Wedding Anniversary of my late wife, Norma, The Pearl of the Orient and yours truly, the Squirrel. I am in reminiscing mode.

Ever wonder why seniors are so cranky? Well we have reasons other than regretting our misspent youth. That’s so far in the past, shrouded in the rose coloured mists of time we generally only remember the goods bits. No, crankiness pretty much revolves around current events aggravated no doubt by politicians or the weather playing havoc with our joints. One of the others is shopping.

Now I often claimed real men don’t shop. That was before I was retired. Now my wife, the Pearl of the Orient insists I’ve no excuse as I’ve nothing else worthwhile to do. Napping apparently doesn’t count.

The Sunday paper had enough flyers in it to account for several acres of boreal forest sacrificed. The Pearl sat them down in front of me and said, “Want to go shopping.”

It wasn’t a question.

Two hours later with my arm and hand cramping up from sorting and clipping, we had a folder full of coupons that if it couldn’t choke a horse, could certainly kindle a good sized fire.

“Just look at all these discounts- 20 per cent off, plus an additional 15 per cent for Senior’s today only!” enthused the Pearl as she reviewed the coupons for the Super Duper Dandy Drug & Grocery Emporium. I could hardly wait.

We managed to push our way through the front doors. The crowd was thick and slow moving, but they were no match for the Pearl at the controls of the grocery cart.

“Where’s that turkey bacon, and those eggs you have on special?” insisted the Pearl, cornering a customer service representative.

“Oh we’re out Ma’am until Friday,” claimed the programmed response of the rep. But when the Pearl raised her cane with the ice pick still deployed, the rep quickly changed his tune and managed to find ‘the last two’ of each. The Pearl put them in the bottom of her cart and threatened to whack another senior that tried to abscond with one in spite of a protesting ‘but… but…but you’ve got two!’

Eventually we made our way to the check out with a full cart. The cashier managed to get everything rung up having to call for a price check only three times. When he was finished the Pearl handed over her stack of coupons.

“Oh Ma’am I’m sorry but you have to present these before we ring up the items,” claimed the cashier figuring the Pearl would simply forget about them. Ah foolish youth. So all the items with the coupons were credited back and then re-rung through with the appropriate discounts. This also required a manager to key in her approval. The other shopper who had tried to abscond with our turkey bacon, tried again with much the same result. Those cane ice picks really are handy even down here on the Beach.

Finally we got all checked out and deployed the plastic. “Thank you for shopping with us today. Move along,” snarled the cashier handing the Pearl her itemized receipt. The Pearl never budged an inch.

Checking her receipt, she inquired, “Where is our 15 per cent Senior’s Discount?”

“Oh Ma’am you have to ask for that before we ring in the items,” snapped the cashier as the Pearl stepped back a couple feet and began once again piling the items out of the cart. The line up behind her groaned in unison.

It only took another fifteen minutes, two trips by the manager and fifteen feet of cash register tape, to get that additional fifteen per cent.

As we wheeled out the door a triumphant Pearl tapped her cane on the tiles and enthused, “Boy I like shopping here!”