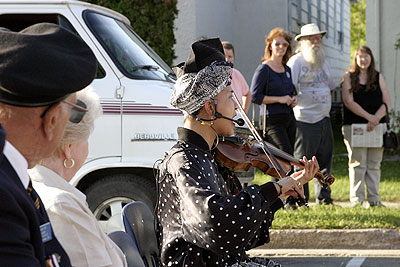 Even though she was seated in the back row, violinist Luluk Purwanto couldn’t escape the spotlight Monday in a special performance outside Royal Canadian Legion Branch #29. Purwanto and three other musicians from the Netherlands made a brief stop in Fort Frances on their cross-Canada “Tulips 2005…60th Anniversary Friendship Tour,” a tribute to Canadian veterans who helped liberate Holland 60 years ago. The Dutch musicians, who are traveling in a 1979 bus with more than one million kilometers already under its wheels, play in Thunder Bay tonight and in Iqaluit, Nunavut on Canada Day. –Wes Gilbertson photo