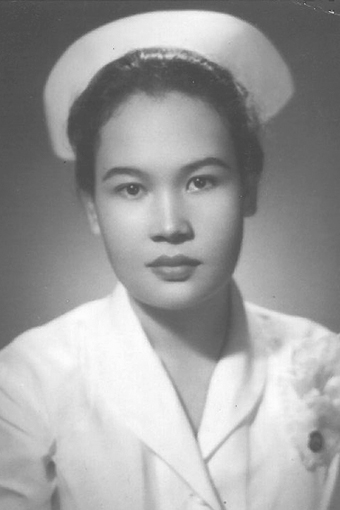 Last Saturday evening, September 19, 2020 at 11 p.m. Norma Elliott, our Pearl of the Orient, with her family at her side slipped peacefully away from us after a long battle with multiple myeloma. Norma was born to Jose and Maria (Teves) Bacang on July 1, 1940 on a plantation called Tangculogan at Bais City, Negros Oriental, Philippines.
Norma had an irrepressible spirit. Her sense of humour and madcap misadventures in nursing and life entertained all. Whether it was terrorizing her mother with bags of snakes, nuns at the convent school or badgering Ministry of Health bureaucrats until she got the attention she thought the situation demanded. The Mother Superior at the Convent School she attended reportedly said she would rather “look after 500 wild water buffalo than one Norma.” That was as she expelled Norma on the first of several occasions before Norma graduated at the top of the class.
Norma attended Nurses College at Velez Academy in Cebu, Philippines, graduating in 1961 as an RN, again at the top of her class. She then emigrated to Galveston, Texas as an exchange student working with many noted heart specialists while honing her skills as an operating theatre scrub nurse. Norma returned to the Philippines in 1965 with the intention of returning to Texas to study anaesthesiology, once her visa was approved. But an offer from the then Winnipeg General Hospital, in Winnipeg, Man., to come and head up a scrub team for a new open heart and kidney transplant team program intervened. Texas’ loss was our gain.
On Friday, February 7, 1969 she met a lonely travelling salesman, Jack Elliott. They proposed to each other on Tuesday, February 11, 1969 and married on April 12, 1969. A whirlwind romance that has lasted more than 51 years.
Norma’s career in the operating room as a floor supervisor was a passion, first in Winnipeg, then at Holy Cross Hospital in Calgary, and back to Winnipeg before she and Jack moved with their young family to a farm in Pinewood, On. The then Red Cross Hospitals in Rainy River and Emo quickly discovered her talents. Norma’s medical and managerial skills saw her quickly become ‘the lady in charge’ as she ran the units and headed the local transition of Red Cross out of remote hospitals across Ontario amalgamating both Rainy River and Emo with La Verendrye in Fort Frances as Riverside Health Care Facilities Inc.
Norma was a driving force behind the design, funding, and realization of the new Rainy River Hospital and Extended Care Centre. It is a lasting testament to her abilities and commitment to Health Care and her community.
After retiring in 2000 Norma never slowed down, expanding her volunteer efforts serving on the Board and then as chair of Riverside Health Care Facilities. In 2005 Norma was seconded by the Ministry of Health to oversee and bring back into compliance the Rainycrest Long Term Care Home in Fort Frances prior to its amalgamation under the Riverside Health Care umbrella
Norma was active on the board and as chair of the Rainy River District Child & Family Services, and then onto the board of the amalgamated Kenora and Rainy River District Child & Family Services.
Norma served on the Rainy River High School Parent Council, The Lady of Good Counsel Catholic Women’s League and the Parrish Council. At her passing she was a Charter Member of the West Rainy River District Lions Club.
Norma and Jack lived first in Pinewood from 1974 and then Blue Township in 1981, raising their family. After becoming retired ‘empty nesters’ in 2002 they moved into the Town of Rainy River. They have made many life-long friends across the district and Norma is famous for her ‘egg rolls,’ a Filipino treat.
Norma and Jack spent many happy winters in Florida and were fortunate to be able to travel extensively across Canada, to China, Mexico, Europe, and the Philippines
Norma is survived by her husband of 51 years Jack; their sons Scott (Christy) of Kitchener, Ont., Mark of Winnipeg; six granddaughters Emily, Chloe, Amanda (Brendan), Abigail, Rebecca, and Dinah; two great-grandchildren Trent and Violet; sister Teresita Bhangu of Winnipeg; nephews Jaspreet (Dervla) and family, London, On, and Mandeep (Anna Maria) and family, Winnipeg; special extended family Telford & Peggy Advent, Stratton, Emily & Norm Hyatt, Barwick, Carolyn Advent, Stratton, Ruth & Alan Dangoy of Kenora, On, and Jeanette & Gordon Armstrong of Rainy River. Norma was close to, and is survived by many of Jack’s siblings, their partners and descendants across Canada and the world. Norma has a large contingent of nieces, nephews and cousins in the Philippines.
Norma was predeceased by her parents Jose & Maria Bacang; siblings Francisco, Carmen, Emeliano, Ramona, and an infant brother all of the Philippines; sister-in-law, niece and nephew Carol, Sheena, and Timothy Jorgensen of Calgary; and brother-in-law Pal Bhangu.
Cremation per Norma’s wishes has taken place. When COVID-19 is hopefully no longer a problem, a celebration of Norma’s life is tentatively scheduled for July, 2021.
A small Funeral Mass for Norma will be celebrated by Father Tomas on Saturday, September 26, 2020 at 1:00 p.m. for immediate family and close friends at Our Lady of Good Counsel Catholic Church in Rainy River, Ontario. Friends are reminded that Social Distancing will apply as required by Ontario Health guidelines and admission to the service may have to be restricted. Thank you in advance for your understanding.
Flowers are gratefully declined. If friends so wish in memoriam donations may be directed to the ongoing benefit of the Rainy River Health Centre through the Riverside Foundation online at https://riversidefoundation.ca/, or to a charity of your choice.