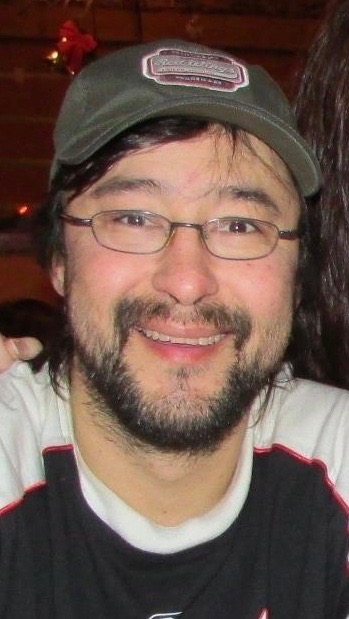 It is with heavy hearts that the family announces the peaceful passing of Derek James Perreault, age 49, of Fort Frances, Ont.
Derek was born June 3, 1970 to Merle and Janice Perreault of Fort Frances.
He grew up on Couchiching First Nation where he resided most of his young life.
Moving to Thunder Bay, Ont. he went on to pursue a career as an electrician.
Derek was employed by Ontario Hydro till 1993 on the transmission crew. When his job ended he moved back to Fort Frances where he spent a majority of his career at DJ Roach Electric, then ended at the Sapawe Mill.
Derek had a great sense of adventure and didn’t let anything hold him back.
He had a strong passion for hockey with the Detroit Red Wings being his favorite team, this lead him to coach many teams over the years with his best friend, Chunk.
He also was an avid music lover, like his father he picked up that guitar and just started jamming away.
On Aug. 14, 1999 he married the love of his life Andrea Bell. Together they raised their beautiful daughter, Samantha Leigh.
Derek had many memories to cherish over the years, especially when his granddaughter, Blaire, was born. She was his everything, over the moon with love he was a papa … her papa.
He was predeceased by his parents, Merle and Janice Perreault; brother, Dennis; grandparents, James Sr. and Janet Perreault, and Stan and Yvonne Walton.
Derek is survived by his wife, Andrea Bell-Perreault; daughter, Samantha (James) Thomas; sister, Denise (Darren) Bragg; brother, Brett Perreault; granddaughter, Blaire Thomas; nieces, Hailey, Payton, Emma and Abby; nephews, Jayden and Corburn; great-niece, Sophia; father- and mother-in-law, George Bell and Jane Gillon; mother-in-law Lucy Bell; two brothers-in-law, Kevin (Toey) Bone and Jon Bone; and three sisters-in-law, Jaimie and Lorie Bell and Christie (Allen) Raoul.
A celebration of life will be held on Saturday, Sept. 14, 2019 at Couchiching First Nation Multi-Use Rec Centre at 11 a.m. with interment at Our Lady of Lourdes Cemetery on Couchiching First Nation.
Honourary pallbearers will be Scott McPherson, Marc McPherson, Marty McPherson, Brett Perreault, James Thomas, and George Bell along with his nieces and nephews.
Online condolences may be made to www.greenfuneralhomefortfrances.com