“Somebody must have dared this girl, and she obviously took everyone’s advice and wore the least amount of clothes possible,” the announcer at the annual “Polar Plunge” said Sunday over a large speaker as I walked the so-called “plank” on my way to jump into a large hole cut in the ice.
Although I could hear what the announcer was saying, all I could think was: “Oh man, it’s over, there’s no turning back now.”
I probably could have stood on the edge of the water for three-six hours before making the “plunge.” The front of my body would move towards the water, but my feet were frozen (if you will) to the ground.
But with clenched fists and jaw (certainly the most attractive expression on my face), I did it.
Oh my God, I could not get out of that water fast enough. I was clawing for the edge and got out so fast I ended up cutting my knee on the ice.
I had my hand up in the air: “For the love of God, somebody grab my hand and help me out of here.” Alas, I was on my own.
My face was stuck in the shock position for about what seemed to be a lifetime, but in reality was 10 seconds. My mouth was frozen open and I was trying to talk, but nothing was coming out except for the water I had accidentally inhaled when I went under.
I wanted to laugh, or at the very least smile, but really I couldn’t. I had the biggest wedge of 2005 and I didn’t even care.
All I could hear were muffled voices and laughter. It was like slow motion that you see in the movies—you know, the devil voice with the evil laugh.
Then I bee-lined it to the green shack with the mini-heater in it. I was trying to walk fast, but my legs wouldn’t let me.
I finally made it into the shack, where everyone gathered to talk about the experience, which mostly consisted of comments such as: “Oh, man, that was cold,” “I can’t believe I just did that,” and “ I can’t feel my face.”
And then there were the people who hadn’t jumped yet—staring at us all with devastated fearful looks on their faces.
Then came the dreadful walk back to La Place Rendez-Vous, which I thought was going to be the crippler. But it ended up better than the walk out to the ice because this time I couldn’t feel my body.
I walked into the restaurant, where my friends had a large Caesar waiting for me on the table, which I downed in about a minute-and-a-half. And then social hour came, where everyone seemed to ask the same question: “Why did you do that anyway?”
To which I responded: “Well, my mom told me to do things I would never do if I lived in the city. I would never jump into a frozen lake if I lived in the city.”
And, obviously it was great that I was able to raise money at the same time.
The rest of New Year’s Day consisted of hot showers, heating pads, large duvets, and a couch.
But the 2006 “Polar Plunge” was such a great experience and the way I see it, it was a small price to pay to help out local charities. I would do it again in a second—and by that I mean a year.
Count me in for 2007. 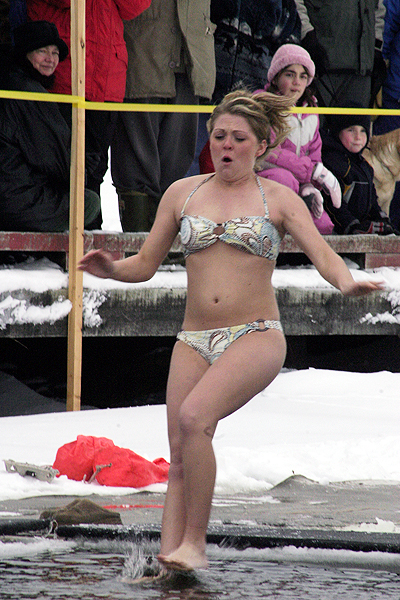 Times sports reporter Jenni Condon braved the elements on Sunday and participated in the annual “Polar Plunge” to raise funds for the Voyageurs Lions Club. Condon—an Ottawa native who recently moved to town—said she thought the experience was unique and would do it again next year. Overall, the more than 40 jumpers raised $12,660.
—Melanie Béchard photo