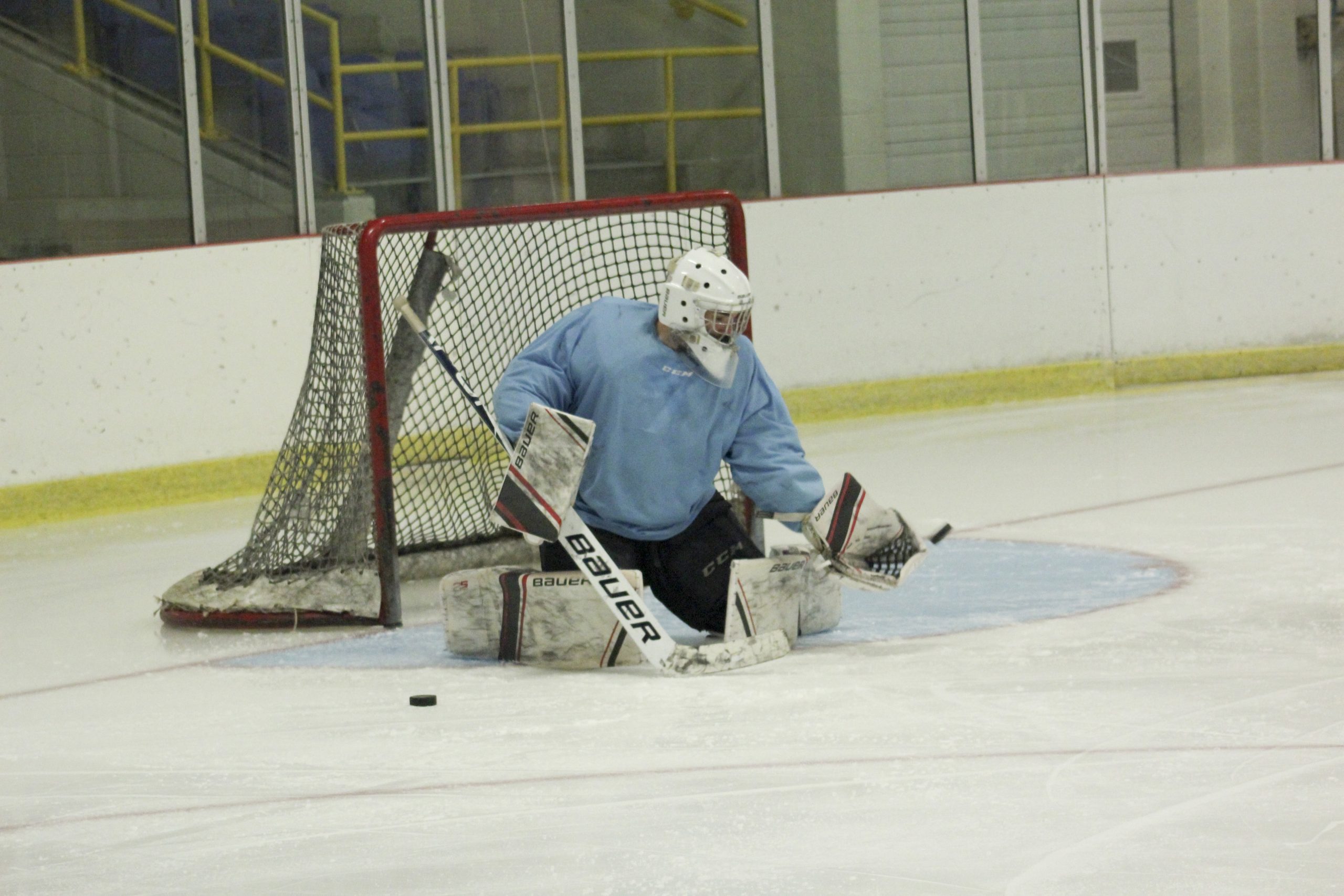 Pre-season play has begun for the Superior International Hockey League, and the Fort Frances Lakers, under new head coach Bernie Lynch, above, are ready. They’ve been practicing daily, to build their skills and speed. Their first games since COVID shut down the league in spring will be against the Red Lake Miners, November 28 and 29. SIJHL Commissioner Darrin Nicholas calls the commencement of game action in the league a welcomed step in the right direction. “It’s great to be able to shift the focus for our league back where it belongs – on the ice. We certainly want to thank Hockey Northwestern Ontario for their advocacy and leadership to get us to this point, and we remain unified in our commitment to a safe return to hockey.”

One year ago, the water level on Rainy Lake was at record highs. Docks were submerged, lowlands flooded, and dams overflowing. The lake looked a lot different than normal both to anglers and fish alike.
Oh what a difference a year can make.
This year, the lake is at its lowest level since . . . well since anyone can remember. Lowlands are dry or drying, docks are four feet out of the water, and the dam is at a trickle.
The lake once again looks much different than normal.
For the fish, this means moving from traditional feeding and spawning areas because they are too shallow or out of the water completely. It means finding cover in new locations and locating the scarce weed beds a dry spring and cold, harsh winter have produced.
For the angler, this means finding where they’ve moved to. It means looking at topographical maps trying to find places with suitable habitat for the big hawgs.
Where’s the water at the right depth? Where’s the weed growth this year? Where are the boulders, points, and shelves the fish might be hangin’ around?
“Spots where there are normally fish, there aren’t any, and spots where there usually aren’t fish, there are,” said Bill Godin during some pre-fishing action last week.
Godin and his partner, Karl Howells, are starting the Fort Frances Canadian Bass Championship on Thursday morning in 13th spot after placing there a year ago.
Godin, co-owner of Lake Despair Lodge north of Devlin, has fished the FFCBC all nine years. He is a firm believer in pre-fishing—and feels it is even more important this year with the low water levels.
“A lot is different this year,” he noted. “Things have changed for everybody.
“Everybody’s got to do their homework all over again,” he said of the need to pre-fish Rainy Lake this year because the usual “honey holes” don’t have the fish they once had.
“Everybody’s trying to find new spots.”
He’s spent roughly 80 hours pre-fishing for this year’s tournament. He’s spent a lot of time on the lake testing water that used to hold fish and trying out new spots.
He’s spent a lot of time studying maps, too.
“I have the same maps beside my easy chair,” he said of the maps of the lake he has in his boat. “You wouldn’t believe how often I look at them.
“All the spots we’ve fished [on that day of pre-fishing], I haven’t fished this year,” he said as the evening came to a close. “There are usually fish on them.”
Godin’s expectations probably are higher than most since he (along with this reporter) did catch a few fish—and some that were pretty nice in size. That said, things could have been better.
“I knew it was going to be tough,” he excused, adding quickly that “we saw some big fish.”
He’s right, we did. And you can bet that a couple of stops made that day will be on his mental list of places to stop and try for at least a few minutes between Thursday and Saturday in hopes of hauling in the hawgs.
He and his partner keep a mostly mental map of spots where fish are holding and where they’ve seen the big ones.
And that’s one of the keys to pre-fishing. Finding fish, not necessarily catching them—especially as the days leading up to the tournament dwindle down.
“Get in, get one, and get out,” Godin said of their strategy while pre-fishing in the last days before the tournament. “Not sure you can over work a spot but it might be tough for a couple of days.”
Godin’s strategy usually involves a lot of top water bait fishing. He says that it’s an effective way to locate fish, then use other methods, if necessary, to bag them.
“We work as a team,” he explained. “One works a top water [lure] to stir them up; the other uses a tube bait [or other lure] to nab them.
“I don’t believe you catch more fish on top water lures, but I believe you get bigger fish,” he added.
During pre-fishing this is particularly importance since it’s easier to cover more water with the top water lure and find those big fish if they’re there.
“We eliminated a lot of water,” Godin noted, taking a positive out of the negative of not catching any huge bass.
For all anglers, time spent pre-fishing can mean time saved during the tournament by passing over water that wouldn’t produce. The more time the lure is wet, the better anyone’s chances are in catching fish.
“The bass are there somewhere,” Godin said, noting that even the difficulty in finding fish this year doesn’t necessarily bring the less experienced anglers up to par with the more experienced ones.
He added that sometimes home lake advantage, or merely a reliance on scouting and experience from previous years, can keep a team fishing a place that produced in the past longer than is prudent.
“The good [experienced] guys will figure it out.”
Godin said that in order to win the FFCBC, or even place well, things have to go well. And though the planets don’t need to be aligned (not that it would hurt), it is tough to get everything to work together.
By pre-fishing, you at least can put things in your favour. But that isn’t always enough.
“Everything has to come together,” he stressed. “It’s hard to get that to happen for three days.”
For Godin and his partner, the goal is to have at least some things go their way.
“We want to place well this year for next year’s tournament,” he said, referring to the $50,000 first-place prize up for grabs in 2004.
“Our goal is to get in the top 10 . . . we would like to finish first . . . ” he grinned.
(Fort Frances Times)