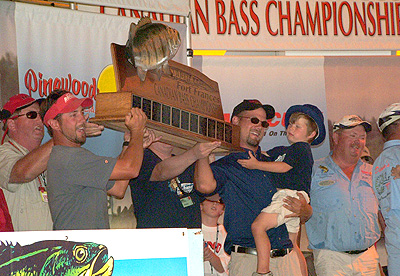 Dave Bennett of Sioux Narrows, left, and Mark Libitka of Kenora held aloft the trophy as winners of the 12th-annual Fort Frances Canadian Bass Championship on Saturday afternoon under the big tent. The anglers brought in a three-day total of 54.23 pounds.
—Melanie Béchard photo

So let’s wrap it up—the 2006 Winter Olympics have come to an end (that’s it . . . already?) with a full 2-4 of medals for Canada—not bad at all.
It seems like it flew by, and I feel like I could have watched curling religiously for another 10-12 years straight (yep, you heard right, I said curling).
Some people find it painfully boring to watch and I’m not gonna lie—before the Ontario Scott Tournament of Hearts here, I probably would have agreed. However, after watching roughly 18,000 hours of it in less than a week, I grew to love it.
Where I learned to appreciate it is another story.
I participated in the annual “Curl for Cancer” a couple of weeks ago (wow, what a blast!) I went out there thinking, “Ha—I’ve seen enough curling to hold my own.” Which I did, if I do say so myself.
But, man, what a tough sport. The amount of thought and mathematics that go into each and every shot is unreal—you’ve got to be a seriously smart person to skip a team (Is that why my rink lost all three draws? Not a word people, not a word).
Honestly, my favourite part was probably sliding at incredible speeds down the sheet of ice. I think it was the unknown of whether or not I was going to eat it going full-speed (what a rush).
I’m pretty sure that’s why Bradley Raymond Gushue stuck with it all these years.
But let me tell you, all that sliding and sweeping and yelling “SWEEP” (I always wanted to do that) didn’t come without some serious consequences. My right leg, which I used to slow myself down after I shot like lightning down the ice, hurt a little bit (okay a lot). The abs also were a little sensitive and the rest of muscles in my entire body were struggling.
Curling gives you a workout you can’t get in a gym. Muscles you never knew you had hurt afterwards.
So, to wrap this little rant up: I have a new-found respect for curlers, Krista Scharf is my hero, and I couldn’t be prouder of the men’s and women’s 2006 Olympic curling teams who brought home two medals (men’s gold and women’s bronze).
Now, dare I begin to discuss the men’s hockey team? I’m going to go with no. Let’s talk, instead, about the other teams that pulled through for Canada.
First of all, Cindy Klassen pocketed five medals in speedskating event (one gold, two silver, and two bronze). Also, the bobsleigh event, who knew?
Apparently Canada holds some serious sledders (or is it sleighers?) because Pierre Lueders and Lascelles Oneil Brown captured silver in Torino.
Jennifer Heil took a gold in the women’s moguls and, of course, the women’s hockey team brought home the gold medal.
The way I see it is, although Canada didn’t bring home medals is some of the events I think Canada was hoping for (ahem, men’s hockey), do we ever have a lot to be proud of.
Look at the population of our country and compare it to the United States, which has 10 times the amount of people and only took home one more medal than we did.
Which brings me to my next point. Although the 2006 Olympics have come to an end, we have our own little Olympics starting here in Fort Frances.
Considering the population, the athletic talent this district holds certainly is something to be proud of. The Muskie boys’ hockey team, although they have an automatic berth to OFSAA, finished the season in first place and led the NorWOSSA standings by seven games.
The Muskie senior girls’ volleyball team will be travelling to Dryden next week for OFSAA, as will three Muskie swimmers.
Take local swimmer Alex Parent, who is accomplishing amazing things in his life right now and I’m sure we’ll be seeing more of him—and many other local athletes—in years to come.
But for now, regardless of how they finish in the upcoming events, we know they will go out there (just as most of the Olympic athletes did), try their best, and represent our district with the utmost pride and respect.