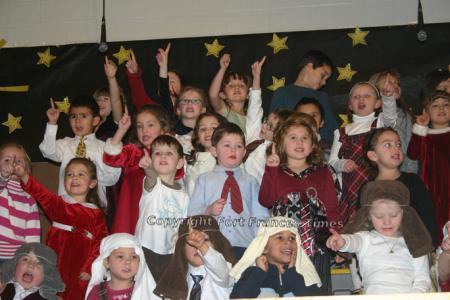 Junior and senior kindergarten students at St. Michael’s School joined together to perform the finale to their Christmas concert last night, which also marked the end of the holiday concert season for local schools. Today is the last day of school before the Christmas break.

The other day I sat down at the computer with every intention of writing another “Recollections” column. Oddly, an “Out of Memory” error message flashed before my eyes.
I’m not sure whether I saw it on the computer or in my head but it certainly was an omen.
For some months now, I have been struggling to come up with interesting ideas but the task has become more and more difficult.
Oh, I am sure there are still incidents that I could describe. Like the time I managed to drive the car into the ditch one Sadie Hawkins night.
But if I did so, I would have to explain how the windows in the car got so fogged up (perhaps it was a faulty heating system?)
Or I could write about the time I got kicked out of math class in Grade 13 but that would mean that the terrible truth about one of my classmates would have to be made public.
Or the time that my friends and I were loading the boat to go fishing for a couple of days to celebrate the end of the school year. My father, who was watching intently as our supply of refreshments went on board, then looked at me with raised eyebrows and asked, “Aren’t you going to drink any water?”
“Oh,” I answered lamely, “Norm is bringing that in his boat.”
Then, too, I have never written about cruising Scott Street in Ray Kirk’s Model A Ford. To do so might mean that some quite respectable grandmothers would have to answer a lot of embarrassing questions from their grandchildren.
Nor have I mentioned how I got the strap in elementary school. Only once, mind you, and it wasn’t even my fault!
You see, there isn’t much left to be told, at least not much that is suitable for a family newspaper.
So it is time to quit. It has been great fun for me, and I thank Mr. Behan and the Times for letting me share my memories with you. I hope the columns provided an opportunity for you to sit back and reminisce about growing up in Fort Frances.
Thank you to those who wrote letters to the editor in response to some of the columns, and thanks as well to those who have told me in person that you enjoyed reading them.
May I suggest you buy a copy of the “Recollections” booklet as a keepsake and support the Fort Frances Museum at the same time?
And don’t forget to get your copy of “On the Allan Cup Trail: The Story of the Fort Frances Canadians,” which will be available this spring or summer.
My computer is winking again at me–“Out of Memory” it says.