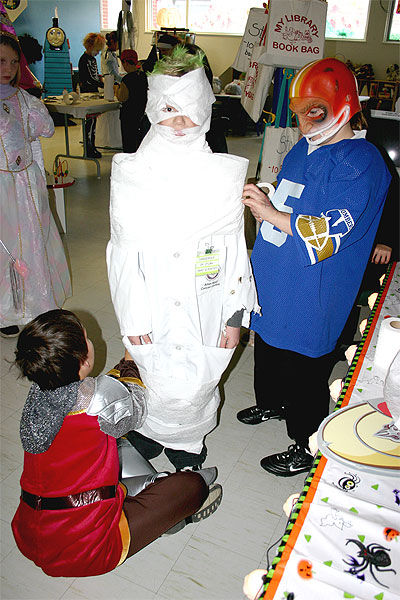 Dylan Ossachuk volunteered to be “mummified” in toilet paper by Jordan Bruyere, left, and Shanleigh Fryer during the Fort Frances Public Library’s Hallowe’en party on Saturday afternoon. Kids showed up in costumes and made Hallowe’en crafts, bobbed for apples, played games, and enjoyed some snacks. —Melanie Béchard photo

We have a tradition on New Year’s Day. It is the day that marks the official end of the Christmas season in our home.
It is the day we return our home to its natural state.
The first items packed are the festive decorations that are spread throughout the house. While members of the family retrieve the ornaments and figurines, my mother-in-law sits on the couch and carefully wraps each item.
When more than one person is fetching ornaments, my wife joins her mother in carefully repackaging the ornaments. Eventually, they are all packed and then it is the tree’s turn to be stripped naked of all its sparkle and excitement.
And the lights that illuminate it are removed so only the bare tree is left.
The Christmas decorations and ornaments are safely stored back into their cupboard to be rediscovered in 11 months.
Once the tree is removed, our home seems bare.
We continue to have “real” Christmas trees in our home—much to the dismay of our youngest son. He has allergies that flare up at Christmas time, but even with a running nose, sniffles, and sneezing, I think he enjoys the traditional tree.
The one drawback to the real tree is the clean-up. Daily our tree this year seemed to gulp almost two litres of water and remained flexible. But by the time the lights were unwound from the branches, almost two cm of needles had accumulated under it.
I believe this is where the real test for vacuum cleaners should be demonstrated. A circle of almost five feet in diameter thick with balsam needles is the real evaluation of sucking power.
Pulling those prickly needles out of the carpet becomes the test.
And regardless of what you do, eventually the hose becomes clogged as the needles seem to work themselves into the tightest jam.
So you take the hose off and go outside and bang the hose until the needles are dislodged.
The alternative is to back blow the needles and spread them across the room. I’ve made that error—and the resulting mess is not great for household bliss.
Now, the first attack of the needles begins with a small brush and a dust pan. On your hands and knees, you can get the needles raked up around the tree and into the garbage bag fairly quickly.
And then the vacuuming begins.
Throughout the year, needles will reappear out of the carpet. The memory of the tree and the last Christmas will flash back.
The changeover back to normal seems to take a morning. Putting all the decorations out took a full week.