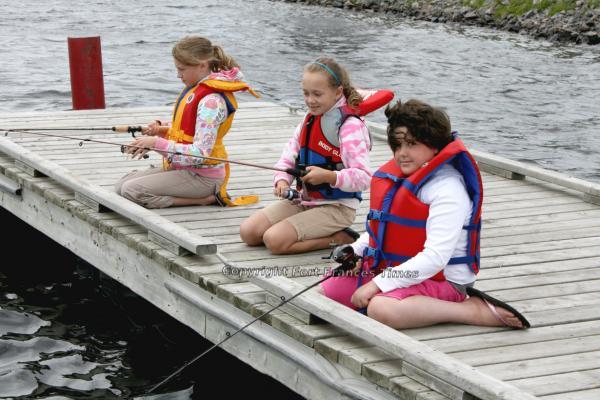 Participants of The Rec’n Crew’s “Hook, Line and Sinker” summer program lined the docks across from the Harbourage yesterday as they tried to get a bite. The theme lasts for the week (to coincide with the Fort Frances Canadian Bass Championship) while other upcoming programs include “Creative Cooking” and “Go Green.”

What I know about fishing could fit in a dwarf’s tackle box.
Here’s what I do know. There seemingly are more fishing shows on TV than there are Members of Parliament; brand-new bass boats cost more than any car I’ll ever own; and “Fishin’ in the Dark” by the Nitty Gritty Dirt Band is one of my favourite line-dancing songs of all time.
Oh yeah, and I’ve never caught a fish.
Four times I’ve taken an angling excursion, and every time my fate was as inevitable as a guppy wandering into a piranha tank.
Well-meaning friends and family members took me out to holes where they guaranteed I could catch fish in my sleep. They would bait my hook, show me where to cast my line, and offer numerous tips on how to land the ultimate fish.
Then they sat beside me and reeled in fish after fish as the hours passed. The only thing I caught was a serious case of boredom—and perhaps the odd mosquito bite.
I look around me here in my new hometown, seeing the passion for fishing that exists throughout Northwestern Ontario, and I realize something. God has a strange sense of humour to put a fishing incompetent like myself in the middle of an anglers’ paradise.
But I made another realization while talking to people taking part in or just on hand to watch the Rainy Lake Bass Classic last weekend at LaBelle’s Birch Point Camp up on Northwest Bay.
Fishing’s not just about landing the trophy-winning catch, or bringing home the winner’s cheque (although $5,000 for two days’ work, as was the case on the weekend, is a powerful lure—pun intended).
Those who possess a love for the fishing life do it for almost as many reasons as there are types of fish to catch.
True fishing folk live for the great outdoors. With few exceptions, they are people who respect the environment and carry noticeable disdain for their angling brethren who would abuse the available natural resources.
They also relish the challenge of finding and then landing their dream fish. They are willing storytellers—be it fact or fiction—about their close calls of the past with “The One That Got Away.”
Most significant, though, is the camaraderie that blossoms whenever fishing folk congregate in the same area.
The Rainy Lake Classic was the first fishing tournament I’ve ever attended. With more than $13,000 at stake, I would have expected lots of steely eyes and stern faces to be present, trying to fulfill a quest to be the best.
Instead, everywhere I looked, smiles and handshakes and good luck wishes were being freely passed around. If there were any bitter rivalries between individual anglers, I didn’t see it.
So I’ve reviewed my no-fishing preference. Maybe I’ll throw my line out there again come next spring (ice fishing is still not even a topic for consideration in my books, so don’t ask).
Just keep the camera batteries fresh if I’m able to land one. The picture will have been a long-time coming.
• • •
The Muskie cross-country team nearly owned the podium at the Grassy Narrows Invitational back on Sept. 21.
Of the eight local participants, none finished lower than third in their individual races, with four Muskies crossing the finish line ahead of the pack.
Race winners included Mitchell Green (Midget boys), Sarah Hettinga (junior girls), Aaron Heerema (junior boys), and Jeff Hyatt (senior boys). Taking silver medals were Jennifer Geense (Midget girls), Alex McQuarrie (Midget boys), and Sonja Schulzki (junior girls).
Rachel Geense, who had the option to race in the senior girls’ category, finished third in the junior girls’ but her time would have been good enough to win the senior division.
The team next heads to Thunder Bay for a NorWOSSA meet Oct.