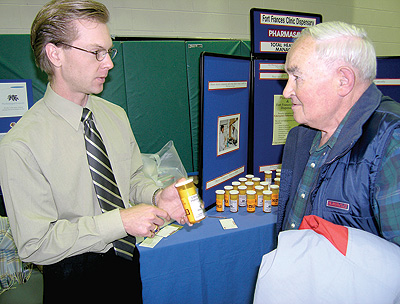 Pharmacist Edwin Bruyere of the Fort Frances Clinic Dispensary showed John Pohanka how the new emergency information vials now available at the clinic dispensary work Saturday at the Fort Frances Seniors’ Coalition’s inaugural lifestyle expo. Well over 200 local seniors’ were at Fort Frances High School that day to check out 37 exhibitors and hear several speakers, as well as visit with each other and have free coffee and lunch. —Duane Hicks photo

The motto of the Scouts is, “Be prepared!” It’s something we should all take to heart.
The Pearl of the Orient is always prepared.
“Take a bath and change your underwear. You never know we might be in a car accident,” she’s cautioned me before many a motor trip.
However, I think if I had on clean underwear and had taken a bath before a close encounter with an 18-wheeler, it would be wasted because afterwards I would certainly need a change and a bath.
With the Emu Fall Fair in full swing this week, you’ll have to be prepared for other emergencies, as well. Ease off on the drinks and the sweet corn; after all, there could be a line-up at the bathroom and one never wants to be caught short.
“No problem, you just gotta be prepared,” boasted Cupcake, Puddin’ Pye’s ever lovin’ wife.
“Head for the line early, ahead of intermission, if you can,” she explained at a recent concert.
“An’ before that, plan on wearing some attire that is easy to get into t’ do the necessaries,” she cautioned as she wagged a finger at Puddin’, who was strapped into his Sunday best suit–suspenders, vest and all.
“When you make the line, get yourself prepared for action. Undo your belt, drop your zipper, and you’ll be ready, no matter how desperate with nary a slip between cup and slip,” Cupcake concluded, as Puddin’ broke ranks and made a dash for the line-up at the men’s room.
We managed to make Puddin’s bail at the city jail three hours later.
“I’m never listenin’ to your advice ever agin’ ” he stormed at Cupcake as he hurried out to the car.
“First it was them fancy boxer shorts you b’en making me wear. Claim the freedom to movement will enhance my potency,” he snorted.
“Well, all it done was enhance my freedom–and just at the wrong time. I took your advice and unzipped in preparation for the action in the men’s room, and that security guard has me arrested fer flashin’,” added an embarrassed Puddin’ as he hid his head in his hands.
So enjoy the fair but take warning, “Be prepared!”