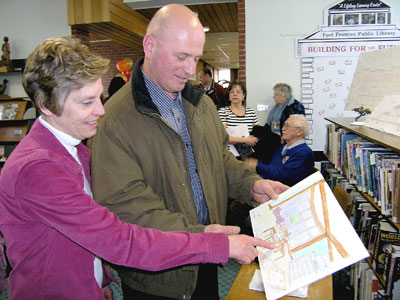 Mary Jane and Bill Gushulak got a good look at a conceptual drawing for the new Fort Frances Public Library during Friday afternoon’s kickoff celebration for the “Building for the Future” campaign. The fundraising campaign kicked off Friday in a big way—garnering a total of $134,130 in donations by the end of the day. —Duane Hicks photo

The Grade 8 student appearing in front of the justice of the peace for selling chocolate bars in her neighborhood pleaded guilty to not having a Town of Fort Frances door-to-door sales licence.
She was followed by three Grade 12 students who also acknowledged that they, too, did not have a door-to-door sales licence to sell citrus fruit at Christmas time.
These were the first charges laid under the new 2006 business bylaw adopted by council back in March.
The Grade 8 student was part of her class’s fundraising efforts to travel to Toronto as part of the annual trip by students in their school. The Grade 12 students were fundraising for their band trip to Europe.
All four now are liable for fines up to $25,000.
They were the first casualties of the new bylaw.
Also on the docket were youth who had gone door-to-door selling chocolate bars for gymnastics and bowling.
Later, before the same justice of the peace, several out-of-town school bus operators were fined for picking up students at Fort Frances schools. The new bylaw requires them to have licences to operate within town limits.
Fort Frances councillors were caught unawares when charges were laid.
“It was never our intention to go after school children for peddler’s licences,” noted one councillor. “Nor was it our intention to go after groups helping the community.
“But you can’t be selective in who you enforce the law with,” the councillor added. “If you choose to disregard the law with one group, that precedent is applicable to all parties who fall under that section of the bylaw.”
Also wondering about their future are the Ducks Unlimited dinner committee, with its auction, and the “Community Chest.”
Both require a licensed auctioneer. And both now require an auction licence for their silent auctions.
The bylaw was modelled after a southern Ontario city bylaw, where these practices have been in place for decades.