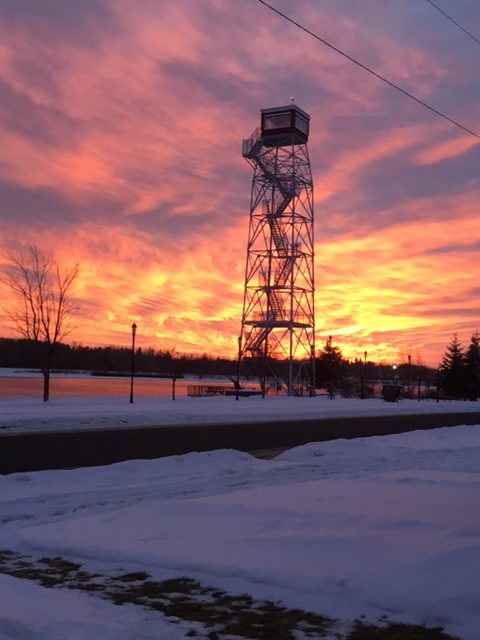 By Sandra Brunetta
Special to the Times

I had never really paid much attention to the tower along the Riverwalk. Oh, I admired it when it was silhouetted against the western sky, but it was just there. I had climbed to the top when it was at ‘The Point’; had marvelled at the view into Minnesota and how close we are to the USA. I don’t remember if I took notice of how many steps I had climbed, but a similar fire tower located in Minnesota has 135.

When we moved from the lake to the river, and we became neighbours, I saw it when I first woke up, and was awestruck when it stood out so boldly as the sun set behind it. And I started wondering about its beginning and how it got to its home along the beautiful Rainy River.

At first, I learned that the 33 meter (100 foot) structure was originally a radar and lookout tower located near Atikokan and was moved to Point Park in 1972 as a tourist attraction. In 2009 the tower was moved from Point Park to the Sorting Gap Marina. But that wasn’t the beginning. I was introduced virtually to Heather Cram, a landscape architect from Winnipeg, who was hired to work on the placement of both the tower and the Hallet. Heather wrote “I remember when we were working on this project, I asked Pam Cain, who was at the museum then, why the cupola was square, as that was not usual. She investigated and learned that it was actually an early warning tower (put there by the US) and, as with the DEW line, there were two more lines, one at a halfway latitude and one just north of the Canada/US border.”

Intrigued, I contacted Lois at the museum in Atikokan, and she sent the following, courtesy of Stephan Watkins:

“In the late 1950s the Cold War was on, the Soviets and the Americans were pointing their missiles and bombers at each other, and Canada was in the middle, so to speak. There was never any doubt who’s side we were on, but we were really “in the middle” territory wise. The Pinetree Line radar net was set up and drills were constantly being performed by the USAF Strategic Air Command in conjunction with the RCAF to test the radar operators and make sure the Pinetree Line would see the Soviet Bear coming over the North Pole.

“Another area of progress was the development and deployment of AN/FPS-14 and AN/FPS-18 gap-filler radars. Having a range of around 65 miles, these radars were placed in areas where it was thought enemy aircraft could fly low to avoid detection by the longer-range radars of the permanent and mobile radar networks. Gap-filler radar deployment peaked in December 1960 at 131 sites throughout the continental United States.” – Searching The Skies – USAF Air Combat Command – June, 1997.

From what I understand, the RCAF knew there were gaps in coverage, and not just pockets between the existing radar sites. The radar network was great at caching giant flying things above 5000ft, but not so hot between 5000ft and 500ft. The RCAF, with some encouragement from the Americans, reached a decision to try and plug the gap. In 1959 the RCAF started a Gap Filler project, which would place USAF-style “gap filler” stations spread out to create a new, lower to the ground, radar network meant to catch anything higher than 500ft above ground. The “gap filler” would be a 70 ft tower (like a fire-tower) with a radome on the top of it, and two supporting buildings below, housing the radar equipment and diesel generator. Construction began on these mini-bases, but as they were building them, decisions were made and sites were changed. Sites that were on the list, were relocated, some were removed entirely. At any time there were up to 45 gap fillers on the planning board, and in 1964 after budget cuts, they were all cancelled – even those which had already been built.

From the Atikokan museum archives, I learned that:

1962 – 25 gap filler radar stations contracts had been awarded, but were terminated due to the austerity programme. Due to circumstances unknown to Headquarters and Defence Construction the existing forestry tower had been dismantled and moved from the site.

Atikokan is listed as having a joint radar and forestry tower used by forestry personnel.

It was located at Pal Lake:

It appears that it was built but was never operational. From the Atikokan Progress. “The Pal Lake Tower seems to have more lives than the proverbial cat.”

A private company (Northern Electric) was contracted to install and maintain radio equipment at the tower, but a tower at the nearby Caland Ore site made it redundant, and it was soon decommissioned. For at least a few years the Department of Lands and Forests – which actually purchased the tower from the RCAF – used it as a forest fire lookout. That whole program of staffed fire lookout stations was eventually dropped.

By 1972, virtually no one was using the 100-foot structure, except for young Atikokanites – hiking out to Pal and climbing the tower was almost a rite of passage there.

James Wrench (JW) Towse, the industrial commissioner at Fort Frances, had a wild idea: move it to Fort Frances as a tourist attraction. He presented the province with a cheque for $1 – on moose hide – and had the tower disassembled and hauled to Fort Frances. For the next 30 years, it was a popular attraction near Pither’s Point Park; the Fort Frances Historical Commission set up an artifact display at the site, and when the Fort Frances Museum was opened in 1978, it operated the tower.

The radar tower was sold to the Province of Ontario c/o the District Forester, Dept of Lands & Forest, Fort Frances, ON in 1964. During the summer of 1972, the Fort Frances Times reported that the Board of Park Management had, in the past few years, created the park south of the railroad tracks, trees had been planted, and the tower was situated in the landscaped ‘Point’. Industrial Development Commissioner Jaames Towse was responsible for the project, estimated to cost $12,636 for the re-location. The 100 ft tower weighs approximately 90 tons and was assembled in sections, each section being lifted on to the one beneath it by the use of cranes.

Leo Bernier, minister of natural resources opened the tower on July 1st after a short history given by Ron Balkwill, a local forester. During the Fun in the Sun activities that year over 1,000 people climbed the tower. In mid July the “Lookout Tower” Council requested that the stair well be enclosed and that a sign be erected advising that persons were using the tower at their own risk. In 1975 the Museum Committee was established and began to plan a tourist orientated museum display for the tower.

‘The components of the lookout tower, including the red-and-white cupola, are ready for re-assembly at its new site along the riverfront starting next week. A piece of stairway has to be attached to the base there, and then the re-assembly can begin. Then the handrail will be put up along the tower stairway. Work at the site is ahead of schedule, but both the tower and the Hallett won’t be opened for public use until next spring.’

Interestingly, a gap-filler annex was originally planned for Fort Frances, ON, and was to have been an annex of Baudette AFS, MN (Z-132). That one was cancelled prior to construction, according to info from pinetreeline.org. How coincidental, then, that a gap-filler radar tower would eventually end up here. It was originally intended to be used for surveillance. Talking to a friend about it, he told me this story:

“We had received intelligence that an out of province drug courier was to pick up a supply of drugs in Rainier either by walking the train bridge or a small boat. It was very difficult to set up a good surveillance post without detection as the courier was good at counter surveillance. We came up with the idea the tower would be the best option. Arrangements were made with local police to obtain a key for the facility. (The tower was closed for the season) Since it was late in November, on the colder side, before sunrise we carried a 20 lb propane tank and barbecue up the stairs along with food and 2 5 star sleeping bags for warmth. It was late in the afternoon before a successful conclusion.

I guess we can say we had the best bird’s eye for a barbecue lunch in Fort Frances.”

Access to the tower is only available during the summer months, and was stopped last Spring due to Covid 19.