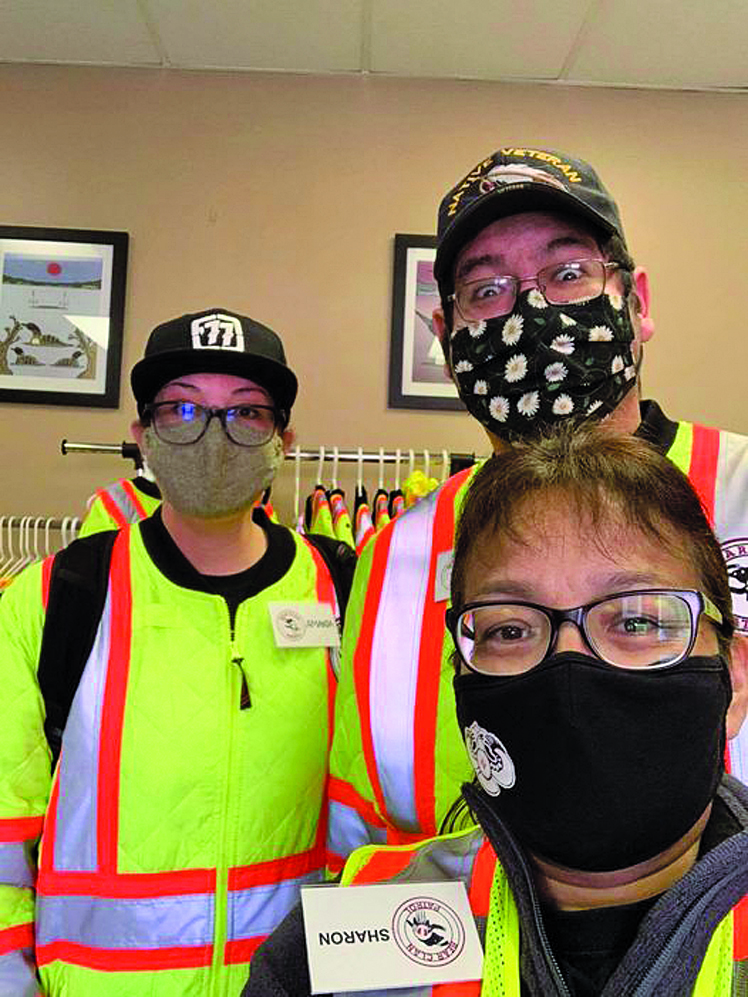 It’s not every day you can order a stacked hamburger and help out a local volunteer organization.

Well, actually, now it is.

As part of a partnership between Neighbours Modern Diner and the Bear Clan Patrol Fort Frances, the local restaurant has created the Bear Clan Burger, a riff on their classic Neighbours Burger that will help to support the group and their efforts to keep the streets clean and give help to those who need it.

Neighbours owner Jamie Pryde explained that the idea for the collaboration came from the simple act of watching the Bear Clan Patrol do its thing. As an owner of a business impacted by a revolving door of restrictions, it struck Pryde that there might be other organizations feeling the pinch.

“The third lockdown has been especially hard for us, and we got to thinking about how our community has been supporting us,” Pryde said.

“We wanted to support the community in some way as well, just to show our appreciation. We own a building downtown and I was driving by and saw the Bear Clan working downtown doing their thing, and I thought it was such a great thing they do for the community. I don’t think they’re recognized enough and we wanted to do something to help them financially, to help them with PPE or just support them in any way we could.”

Pryde said he stopped to speak with the Bear Clan and eventually, after some more discussions with the group, they decided the partnership would work well for both parties.

Pryde says the burger, which features the restaurants’ signature smash patty, along with barbecue sauce and a bacon cream cheese spread, is a win-win for both the parties involved. It helps to bring in and satisfy hungry customers for the restaurant, and two dollars from every Bear Clan burger sold is donated to the group to help them continue to do what they do, be it patrols to clean up discarded needles or handing out warm clothing during the colder months of the year.

It shouldn’t be surprising that local businesses and groups look out for each other and the community at large. But considering that many businesses in the area have likely been hit in some capacity by the pandemic and related shutdowns, it’s not out of the question to think philanthropic initiatives might be put on the back burner while a business like a restaurant tries to weather the storm. For Pryde, there’s no question that the Bear Clan Patrol deserves support for what they do, and a joint venture like this helps them both.

“They do so much good for our community,” he said.

“We’re not the only ones struggling right now. They’re most likely struggling to find funding. I’m not too sure about their situation, but I know ours and I figured they must be in the same boat. Neighbours is less than two years old. We opened in June 2019. As of that anniversary, we’ll have been in lockdown more than not. As a new business it’s really been tough to survive during this. We have a wonderful team that wants to work but it’s been hard to give them hours.”

The restaurant has been flexible and able to introduce a number of new features during the pandemic like new food items, online ordering and curbside pickup spots in the parking lot in order to keep as active as possible. Even while traffic is down and sales aren’t likely as high as they would be with the restaurant fully open to the public, Pryde and his team have still kept their eye on the community and groups like the Bear Clan to do what they can to help everyone weather this particular storm.

Pryde says the burger, which has only been available at the restaurant for a few weeks, has so far been a smash hit with customers, and while it’s only scheduled so far to last to the end of the month, the ongoing pandemic and reception to the burger and promotion might see it hang around for a while yet.

“It’s set to go to the end of April, but if lockdown continues we might just continue doing it,” he said.

“People are responding really well to it.”