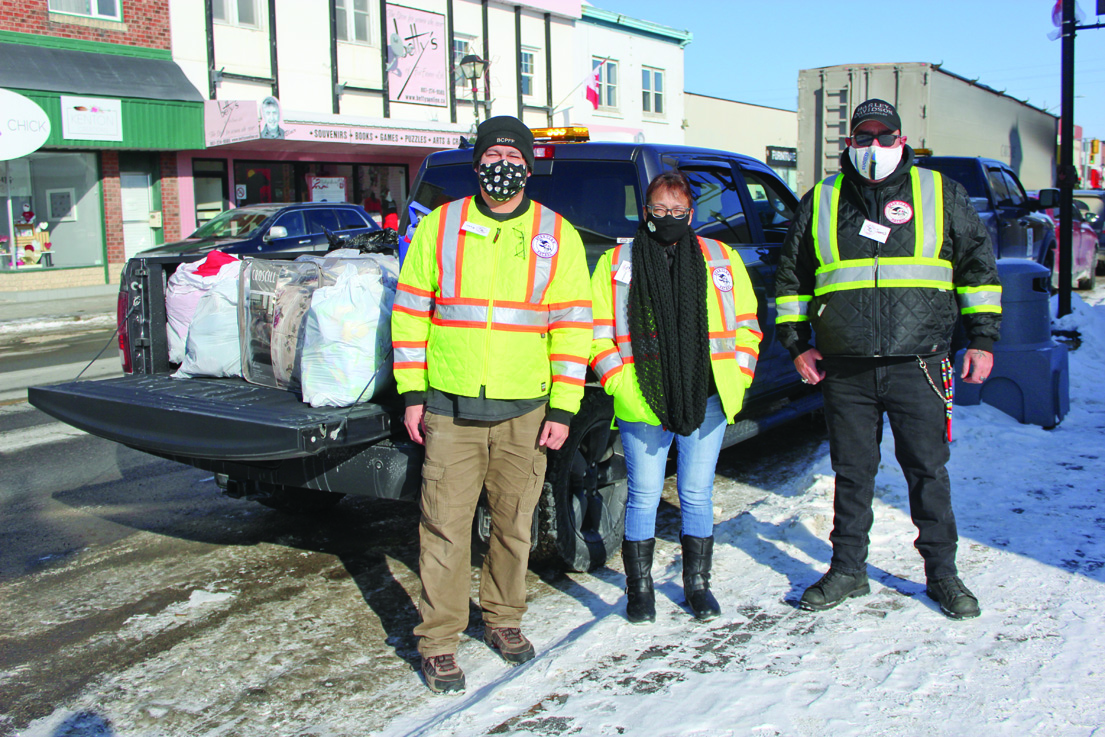 The Bear Clan Patrol Fort Frances is continuing to do what it can to make sure Fort Frances’ vulnerable populations are equipped with some essentials to get through the harsh winter.

Members of the Fort Frances chapter of the organization were set up at the Rainy Lake Square on Friday afternoon to both collect and distribute donations of warm clothes and garments to anyone in need. The collection of gear was loaded into the back of two pickup trucks – an impressive collection that came entirely from the “overwhelming” generosity of the community at large, according to Bear Clan Patrol’s James Eastman. Their goal, he said, is to help keep everyone as warm as possible this winter.

“Our main mission today was to come out with an abundance of winter clothing and whatnot that we’ve received over the last couple of weeks,” Eastman said.

“When the cold snap started we put the call out to get warm clothing because it’s unfortunate, but the homeless and unfortunate people in town need that extra help. The past couple of weeks we’ve been out and about, driving around to pick up donations, giving out articles of clothing, whether they’re here out on the street or at the Family Centre or the Out of the Cold Centre.”

Eastman noted the items they’ve collected are intended for anyone who needs warm clothing during the winter, not just those experiencing homelessness. As much as the Bear Clan Patrol is aiming to get the donations into the hands of the homeless and vulnerable populations, Eastman said there are less visible individuals who are struggling due to the impacts of the COVID-19 pandemic, especially when the winter weather turns particularly harsh.

“With the pandemic people are having a hard time financially, regardless of who or where you are,” Eastman said.

“We put the word out we can accept donations, and we can give them out, and they’re for anybody. If you need a winter coat and can’t afford one, come out and grab one, or come get some socks. With a bit of money we had stashed away we managed to buy 15 pairs of brand-new gloves, and we bought some boots as well. The good people of Fort Frances and outer areas reached out to us and we picked up these donations and we want to get them out.”

The Bear Clan Patrol’s office at the Fort Frances Volunteer Bureau is “bursting at the seams” with donations, according to Eastman. Because of this, volunteers with the Bear Clan Patrol will be making themselves available at the Square every couple of days with more of the donated clothing to both free up space at their office, but also to ensure they catch as many people who might benefit from some extra warmth as possible, particularly after the brutal cold the region has experienced over the past few weeks.

“It’s been tough on them, most definitely,” Eastman said of those the Bear Clan makes effort to work with.

“Both the shelters have really stepped up their game to accommodate them the best that they can. These people need help, they need somewhere to be warm. They shouldn’t be out trying to burrow in a doorway or a bank somewhere. I know it’s hard for a lot of people with addictions that these places have rules, but at the same time those rules are in place for safety reasons.”

Even as the cold snap has broken and temperatures are trending up for the remainder of the week, Eastman said the Bear Clan Patrol is committed to giving out as many donations as possible, along with taking more donations in if people still want to help those in need. The Bear Clan Patrol is still accepting donations of warm clothing, blankets, boots or other warm footwear, socks and long underwear, as well as snacks like power bars and bottles of Boost and Gatorade, different food stuffs that will provide some additional nutrition to people who might not be getting enough otherwise.

Even as Eastman spoke about the generosity of people in Fort Frances and the larger district, a car stopped in front of their donation trucks on Scott Street, and the passenger handed off a $20 bill, which Eastman said helps motivate them to continue helping the community in what ways they can.

“It’s nice to see that support, it makes us feel we are needed,” he said.

“We’re not out here for the spotlight, we’re here to keep the community safe. It’s really nice to have the people come out and support us in this mission. That’s the way it’s supposed to be. That’s the way it should be.”

Anyone looking to drop off donations for the Bear Clan Patrol Fort Frances to distribute can contact them via their Facebook page. The page will also let people know when they will be out at the Rainy Lake Square with more warm clothing for those in need.