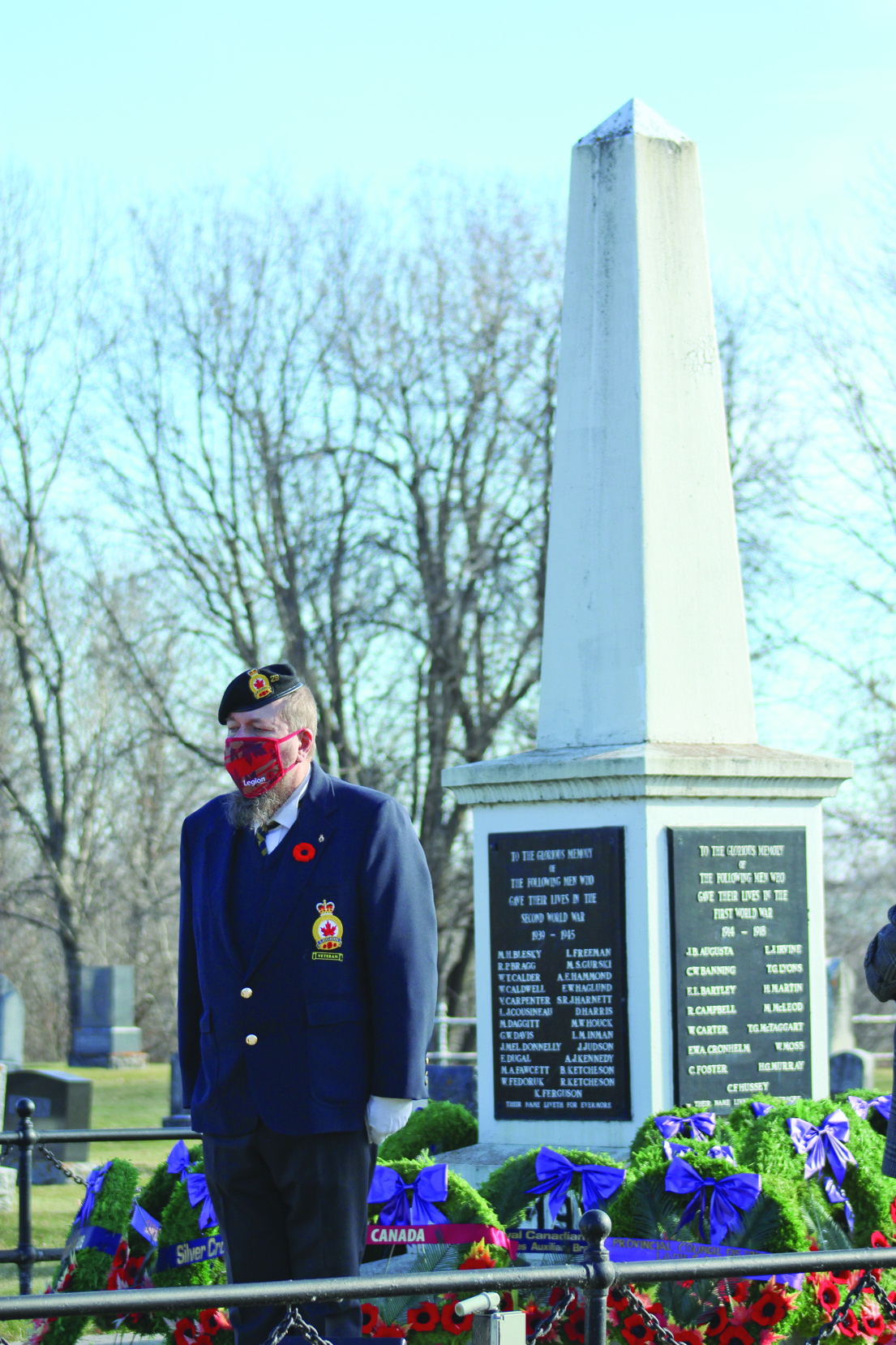 Members of the honour guard stood at the Fort Frances cenotaph today during the Remembrance Day ceremony, even as the public portion of the memorial was moved online due to COVID-19 restrictions.

By John Rafferty
On Remembrance Day, we honour the ultimate sacrifices of those who served Canada in war and in peace.
We honour the veterans who returned, and the more than 100,000 Canadians who never came home from distant shores.
We remember the brave men and women who fought in two world wars, in Korea, in Afghanistan, and in NATO and UN peacekeeping missions across the globe.
We honour the citizens of Thunder Bay-Rainy River who fought on our behalf. The men and women who gave their lives, and the veterans who returned.
We pray for the safe return of those who serve us still.
We look to the courage found in the hearts of soldiers and nurses. We draw the strength from their courage to say never again—and have those words be true.
Let us remember, and let us never forget. What we are today belongs to those who gave so much in service to our nation.
We must honour those women and men by continuing to build a future of peace. We must find the courage to fight injustice.
We must remember. But we also must find the strength to build a more just and peaceful world, and make an end to war.
On this Remembrance Day, we are united in honour of sacrifice, of service, and of hope.
Remembrance binds us to our history and lights our path towards a peaceful tomorrow.
Lest we forget.
Editor’s note: The above was the address new Thunder Bay-Rainy River MP John Rafferty delivered during the Remembrance Day ceremony in Thunder Bay yesterday.

Canadians once again will pause at the 11th hour of the 11th day of the 11th month to solemnly remember those who have given their lives so that the rest of us can live in freedom.
Sadly, but inevitably, the number of veterans who parade here each Remembrance Day will be reduced again this year as time marches on. But even as the faces—and memories—of those who served so bravely in both world wars and the Korean conflict slowly fade away, the reason why we pause every Nov. 11 cannot be allowed to die.
That’s especially true in 2002 because the threat to our freedoms, values, and ideals is as real today as it was 60 years ago during the dark days of the Second World War. And once again, we are calling upon our fathers and mothers, sons and daughters, brothers and sisters to be prepared to make the ultimate sacrifice once again.
Just in April, Canadians from coast to coast to coast felt the anguish of bringing home our war dead when four soldiers with the Third Battalion of the Princess Patricia Canadian Light Infantry were killed during that “friendly fire” incident in the desert of Afghanistan.
And in fact, the mother of one of those soldiers, will be this year’s Silver Cross Mother at the national Remembrance Day ceremony in Ottawa.
Unfortunately, with a new war against Iraq brewing, not to mention the ongoing war on terrorism, the prospect of burying more Canadian war dead is very much real. Which is why the true meaning of Remembrance Day—remembering the human cost of war—must never be lost.
Lest we forget.