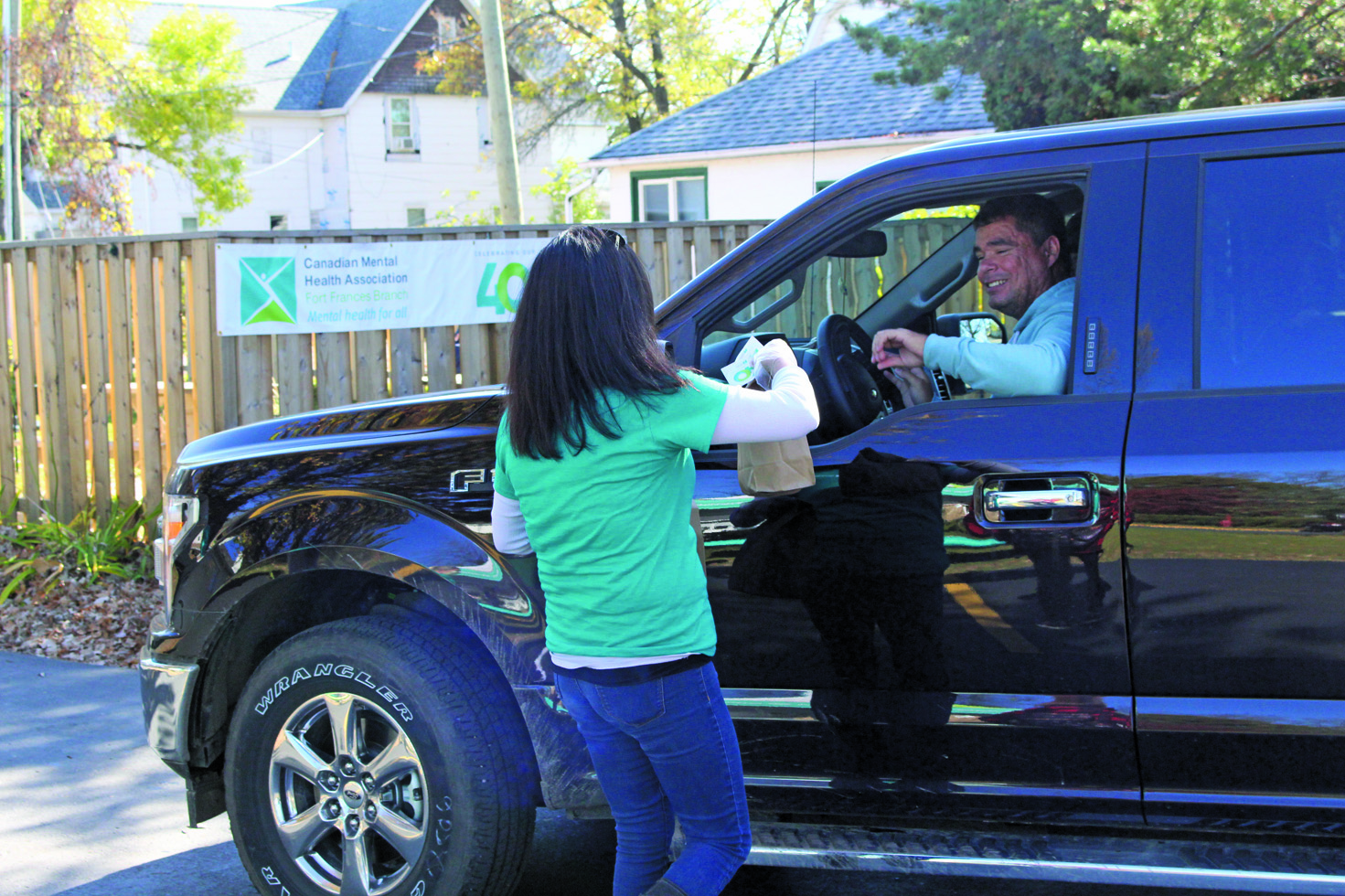 The Canadian Mental Health Association (CMHA) Fort Frances, distributed barbecue meals to celebrate their 40th anniversary and mark Mental Illness Awareness Week. The CMHA operates in 300 communities across Canada. Their mission is to champion mental health, facilitate access to mental health resources and support the recovery of those battling mental illness. They offer a wide variety of programs, including a partnership with the OPP, to respond jointly to sensitive calls, which could benefit from mental health support.

I’ve been enjoying our nice summer weather all right, but I often find it hard to relax with so many things going on here in the riding, in Ottawa, and around the world.
The big picture is never far from my mind, which is why I’d like to offer some food for thought over the next few weeks on the current economic situation in Canada.
It’s not looking pretty, but knowing what we are in for is halfway to winning the battle in my opinion.
I hope that the next three weeks’ worth of columns will prove to be a stimulating read as you relax on your porch, at the cottage, or on your couch as you try to beat the heat.
Analysts recently identified three distinct threats to our future prosperity and standard of living in Canada: a made-in-Canada housing bubble, a made-in-Canada personal debt bubble, and record federal and provincial deficits by our governments.
For this week’s column, I’d like to tackle the housing bubble problem, with the others to follow over the next two weeks.
According to the Canadian Centre for Policy Alternatives (CCPA), a housing bubble emerges “when housing prices increase more rapidly than inflation, household incomes, and economic growth. Several factors tend to contribute to the growth of a housing bubble: low mortgage rates, access to easy credit, net immigration, and the stock of available housing.”
All of these conditions have persisted in Canada for nearly half-a-decade, which has helped fuel economic growth but also created ripe conditions for a national housing bubble.
So how do you know when you are in a housing bubble? Well, the short answer is you have to look at the pricing of homes relative to our net incomes and history.
When you factor in median incomes, the same historic range appears for housing prices.
The CCPA has found that housing prices for 20 years, prior to 2000, stayed in a narrow range of between three and four times provincial annual median income. Today, however, housing prices adjusted for income are out of their historical range, costing between 4.7 and 11.3 times Canadians’ annual income, depending on the local market.
This ratio appears to be validated by information from the Canada Mortgage and Housing Corp. (CMHC), which has reported the price a new single-detached home in May in Vancouver was $1,080,000; in Toronto it was $647,000; and in Thunder Bay it was $335,000.
The numbers shrink slightly when you factor in re-sale homes, but the emergence of a national housing bubble is becoming more apparent by the month.
The big problem isn’t having a housing bubble, though; it is that it almost inevitably will burst. The difficulty arises when the market runs out of either potential buyers or potential buyers run out of credit to fuel the sales of homes and the continuous price increases.
In such a situation, prices only can go down. Since a person’s or family’s net worth often is dependant upon the value of their largest asset, their homes in most cases, declining prices almost always will result in declining net worth, which makes credit scarcer and more expensive to obtain.
Also, when the price bubble finally bursts, as it did in the United States about three years ago, many families will discover they suddenly are locked into a mortgage that’s actually greater than the value of the home—a condition recently dubbed by some U.S. financial analysts as being “under water.”
With a higher debt-to-asset ratio, it will be harder for consumers to gain access to affordable credit to spend on goods and services, which inevitably hurts our economic growth and the profitability of small and large business, which, in turn, leads to job cuts, less potential home buyers, etc.
In short, the bursting of a housing bubble often is the start of a vicious economic cycle that becomes very difficult to recover from, as is evidenced by the painful experience of our neighbours to the south.
Next week, we will look at the similar emergence of a debt bubble, and how it could dovetail with a housing bubble to create some very rough economic times over the next several years.

Dear sir:
The provincial government, under Premier Ernie Eves, announced Ontario would provide $17.5 million to further the province’s beef producers. This is in addition to the $35 million our government already has committed—bringing Ontario’s total commitment to $52.5 million.
Beef farmers, including those in the Kenora-Rainy River districts, have been hit hard since the Canadian border was shut down to beef exports after a single Alberta cow tested positive for bovine spongiform encephalopathy (BSE) in May.
While the province has responded and worked closely with the Ontario Cattlemen’s Association, the federal Liberal government is insisting that their share of funding to help beef farmers only will be available when provinces sign onto the Agricultural Policy Framework (APF).
The Ontario Cattlemen’s Association finds this unacceptable as there are significant changes required to the APF in order for the program to provide meaningful coverage of losses due to BSE.
Our provincial government, under Premier Eves, has risen to the occasion and brought forth their funding commitments. Unfortunately, Dalton McGuinty’s federal Liberal cousins do not appear to believe it is important to help beef farmers through this crisis.
And, NDP leader and local MPP Howard Hampton has been absent on this issue.
On a further note, Dalton McGuinty’s Liberals promise municipalities like Toronto will get two cents per litre of Ontario’s gas tax—or $312 million per year for Toronto transit! That means northern drivers will be subsidizing Toronto’s transit system with our gas taxes.
And Mr. Hampton would turn three cents/litre of the gas tax over to cities like Toronto for their public transit and GO train service.
One last bit of food for thought—both Mr. McGuinty and Mr. Hampton decry the state of the province’s electrical grid system, the problems with deregulation and our lack of new generating capacity, and “dirty” coal plants—all apparently the Tories’ fault.
Both seem to forget the fact the grid problems and lack of sufficient generating capacity developed over several decades. It takes a decade or so to decide on, design, and develop a major generating station or grid expansion, meaning Liberals and NDP (who were in charge from 1985-95) played key roles in the province’s lack of power planning.
It’s interesting to note Mr. Hampton is now a keen backer of the resurrected Conawapa project with Manitoba. But he never mentions it was his party in power, and that he had a seat at the cabinet table, when the very political decision was made to scrap the project in 1991—requiring Ontario to pony up a $150-million penalty.
Thank you, Mr. Editor, for your time and space. I ask only that you and your readers think before you vote on Oct. 2.
Sincerely,
Gary Judson
Emo, Ont.