Saturday is Valentine’s Day and in a quick survey around the office, I learned that something chocolate will be served up in most homes.
It may be cake. It may be cookies. It might be ice cream.
Retailers will have re-stocked their chocolate supplies so that wayward husbands and boyfriends can retain some dignity by offering up a gift.
The florists already have ordered in dozens upon dozens of red roses, and will be busy Friday and Saturday making deliveries.
Local restaurants, meanwhile, have been advertising their special “Lovers’ menus” and are taking reservations. Marketing people are not leaving anything to chance for males.
As we approached our 20th wedding anniversary, my wife surprised me with a bouquet of roses for my desk on Valentine’s Day. It definitely caused a stir in the office. I was surprised, and the delivery person was questioned by the girls at the front counter on whether the roses really were meant for me.
The shoe was on the other foot.
How was I to respond? Candles? Music? Dinner? A night away from the kids?
As I think about Valentine’s Day, I wondered if it was just a “Hallmark moment” or if there was more to the story. I have learned that the Christian religion adopted a Roman holiday called Lupercalia that encouraged the coupling of men and women.
Various versions of the ritual abound. The most interesting is that young men would draw the name of a young woman and the two would be bound together for the holiday. If romance sparked, as it seemed to, they would remain together for a lifetime.
The holiday Lupercalia was changed to Valentine’s Day by Pope Gelasius around 496 AD to recognize the work of an earlier pope, Valentine, who defied Emperor Claudius in 260 AD who had banned men from marrying in order to build a large army (married men wouldn’t leave their wives and families to go to war).
Valentine continued to marry young Christian couples and when jailed, he wrote a letter on the day of his execution to his daughter or young lady whom he loved. It was Feb. 14. It was signed “From your Valentine.”
An American woman, Esther Howland, began the production of cards in the 1840s. Throughout the world, the tradition of giving and receiving cards is common. In some countries, people place small advertisements in newspapers to their Valentines (it hasn’t caught on here).
The guiding light on the Internet seems to be chocolates and red roses. Whether to stay in or go out is more a matter of one’s ability in the kitchen and how much time you will set aside for preparation and for clean-up.
There is something about having your arms in soap up to the elbows as you scrape and clean pots and pans that really isn’t romantic. Plan to clean up on Sunday.
All of this has me in a quandary. Should we go out? Should we stay in for dinner and a movie?
What would make the perfect intimate home-cooked meal? Would it be a steak? Lobster tails? A combination of beef or pork and seafood? Or maybe burgers on the grill, or an order-in pizza?
What might be the perfect salad? Could I get away with salad in a bag?
Should I prepare a cheesecake or some sort of chocolate cake? Can I get those at the store?
Should I buy flowers?
So many decisions. What have I missed? 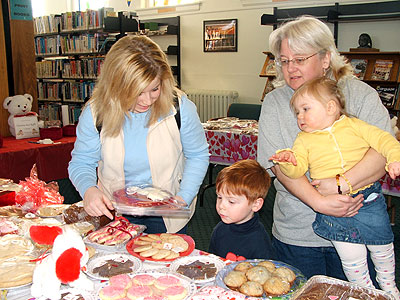