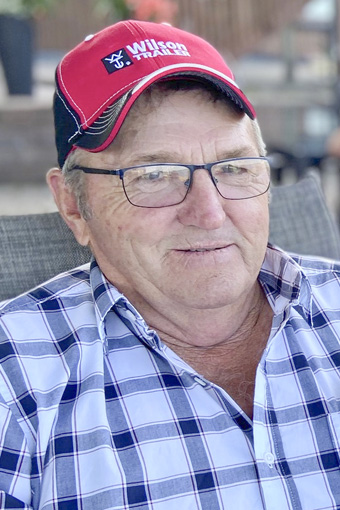 On February 14, 2021, Robin Cecil McQuaker went home to be with his Lord and Saviour. He passed away peacefully at his home with his family by his side. He was born on May 15, 1954 in Emo, Ontario to Carson and Iris McQuaker. He grew up and lived in Stratton and would eventually go on to raise his own family there. He married his wife, Joanne on August 6, 1977.

Robin spent most of his working life around trucks and equipment. In his early working years, he spent time logging and road building and then went on to run his own wood hauling business. After many years of hauling wood, he worked for the township of Morley where he loved giving back to his community. The past couple years found him working for his brother again, where he loved running “the crusher.”

For those that knew him, they will remember his stories, pie auctions and visits over a cup of coffee. No one could tell a story quite like “Oats” could. He loved where he was from, and the people that surrounded him.

Above all the hours he spent working and telling stories, he truly shined at being “Papa” to his five grandchildren. He adored them all and they each brought him great pride and joy.

Robin is survived by his wife of 44 years Joanne; children Jason (Stacey), Janelle (Jesse Hutchinson) and Julie; and grandchildren Presley, Annika, and Eli McQuaker, Grace Gullett, and Charlie Hutchinson. He will be deeply missed by his mother-in-law Caroline Meunier; brothers Norman, Harold (Shirley), Jim (Susan), Pete (Marlene) and Bud (Donna) and sisters Beth (Dennis Brown) and Susan (Harold Norlund); and brother-in-law Buck Watson. He will also be missed by many nieces, nephews, friends and neighbours.

A graveside service will be held in the spring with the date and time to be posted later.

If so desired, donations may be made Rainy River Hospital Auxiliary, P.O. Box 236, Rainy River, ON, P0W 1L0.