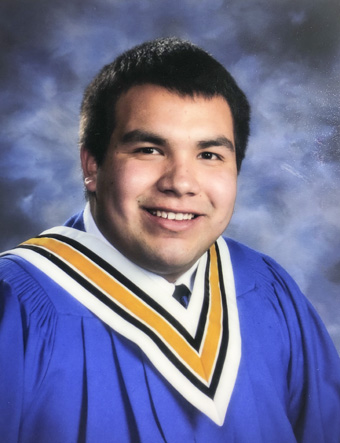 It is with great sadness the family of Ini Gagi-gebii-taang Nolan James Windigo aka Digger Barnes, Bizhew Clan started his journey into the spirit world on March 21, 2020.
Nolan was born July 17, 1991 to Garry Windigo and Cindy Councillor. He grew up in Nigigoonsiminikaaning First Nation.
Nolan started his love of drumming and singing at the age of 2. The love of drumming continued his whole life. Powwow drum groups were like family to him. He also spent a lot of time with his Grandpa Jim learning about his culture and traditions. His Grandpa, along with the rest of his family also taught him the importance of humor. He loved a good joke and could light up any room he was in with his laughter. He loved funny movies and spending time with people especially his family.
Nolan was very athletic and played many sports growing up. He loved baseball, hockey and fastball and played on many teams throughout his life. He made many friends through sports over years and many stories and memories made. He was very social and loved gatherings and was normally the life of the party.
Nolan worked throughout the district in various mining positions and was also actively learning construction work. He was a well-known friend and co-worker to many.
He was predeceased by his Grandparents, James Windigo Sr, Nina Windigo (Councillor). He was also predeceased by cousins Clayton (Beef) Windigo Jr. and Adrian Perreault.
Nolan is survived by parents Garry and Kathy Windigo and Biological mother Cindy Councillor; grandparents Gary Blair and Ida Mainville; siblings, Allison McMillen, Sean Councillor (Jackie), Kimberly Councillor (Trevor), Ryan Windigo (Courtney), Sarah Nelson, Milton Tookenay (Cheryl), Dante Tookenay, Ethan Tookenay (Ashley); as well as nieces and nephews, Calleigh, Chase, Tripp, Tristan, Amelia, Hayden, Sophia, Ariannah, Colby, Abigail, Peter, Zahara; as well as numerous Aunties, Uncles and cousins.
He will be forever missed by his children Emma Windigo and Garry Windigo who he adored and was so proud of along with their mother Jasmine Smith.
Also grieving is his partner Denise Clendenning and her daughter Alyssa.
Traditional wake will take place Tuesday, March 24 in Nigigoonsiminikaaning First Nation starting at 4:00pm and Traditional Burial Service to take place Wednesday March 25, 2020 at 9:00am. Service will be officiated by Elder Ralph Johnson.
Pallbearers will be: Cole Calder, Wendel Smith, Nathan Calder, Trevor Smith, Travis Tom, Dylan Mainville, Kyle Gardner, Joe Bruyere, Irvin Lockman
Honorary Pallbearers: Tim Windigo, Vernon (Nug) Yerxa, Kayla Windigo, Taylor Windego, Alyssa Windego, Shana Windigo, Kelsey Windego, Chris Anderson
In lieu of flowers, donations can be made to the Fort Frances Family Centre.
Out of respect for the community and its members, the family asks that anyone not feeling well or anyone who has recently returned from travelling out of country to please not attend the service. Nolan would not have wanted to risk anyone’s health.