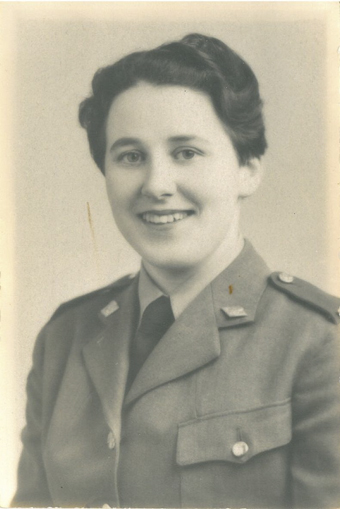 On Friday, August 21, 2020 Margaret Woollard of Emo, peacefully passed away at the age of 97. Margaret was born February 24, 1923 in Cook County, Illinois, USA.
The family emigrated to Emo, Ontario in the mid 1920’s. Margaret lived in various locations around Emo. She attended school at the Emo Public and Continuation Schools. She was a long-time member of the Emo United Church, Emo Legion Br. 99 and a lifetime member of the United Church Women.
When World War II broke out she joined the Canadian Women’s Army Corps. and worked as a sick bay attendant at Fort Garry Basic Training Center and as a stenographer at Fort Osborne in Winnipeg, MB.
She met the love of her life, Gordon at Fort Garry in 1942 and they married in 1950 in Camp Petawawa, ON.
Margaret became a school teacher after the war, more by accident than choice. As she was waiting in Fort Frances for a call to take nursing in Winnipeg, the school inspector met her and asked if she would like to work as a temporary supply teacher in Mine Centre. She enjoyed the challenge and teaching became her career.
She began her career at Barwick and then after her marriage in 1950 taught on the base at Camp Petawawa and other various Army Bases and Public Schools in Canada and Germany as an Army wife.
Margaret had a deep love of music and sang in various choirs throughout her life.
She had great appreciation of the outdoors and enjoyed 45 years of visiting her cabin on Clearwater Lake which she had built in 1969. She enjoyed rowing and spent many an hour in her boat on the bay. She reconnected with childhood friends Rev. Doug Young and wife Thora and Dr. Arthur Young and wife Joyce at Clearwater.
She is survived by her husband Gordon and numerous nephews and nieces.
She was predeceased by her parents Anton and Anna Van Drunen; sister Ruby Gallagher of Fort Frances; and four siblings.
A graveside service will take place on Friday August 28, 2020 at 11:00 a.m. at the Emo Cemetery. Rev. Frances Flook Officiating. If desired memorial donations may be made to the charity of your choice. Arrangements entrusted to Northridge Funeral Home.